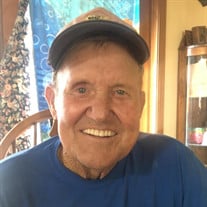 Albert Lee Chapman (Frog), age 78, of Edgerton, Kansas, passed away on Monday, March 16, 2020, at his home surrounded by his family. Albert was born on June 13, 1941 in Kansas City, MO, the son of Floyd and Pauline (Raw) Chapman. Albert spent his teenage years working as a newspaper boy, at Price’s gas station, and a cleaner at Las Vegas restaurant; where he met the love of his life. Albert was united in marriage with Deney Wilcox on October 22, 1962, in Kansas City, Kansas. The union blessed them with three wonderful children; Don, Darlene, and Charlene. They spent 57 wonderful years together. They were truly made for each other. In 2004, he retired from the Teamsters Local Union #541 where he was well-known and still very well-known today as one of the best Boom Truck operators around. After retiring, Albert enjoyed fishing, playing cards, and slowly driving anywhere and everywhere. From four wheelers to back hoes and his own personal Boom Truck, Albert enjoyed all his toys. He is preceded in death by his father and mother, Floyd and Pauline Chapman as well as his brother, Charles Chapman. Albert is survived by his wife, Deney, of the home; and his children Don Chapman (Nikki) of Paola, KS; Darlene Lundy (Mike) of Edgerton, KS; and Charlene Holtgraver (Steve) of Edgerton, KS. He leaves behind seven special grandchildren; Ryan (Christena), Zachary (Maddison), Lauren, Colby, Alexis, Blake, and Reagan. He will be dearly missed by his great grandchildren as well. A Memorial Service will be held on a perfect sunny day in the next few months at Maple Hill Funeral Home in Kansas City, KS. Memorial contributions can be made to the American Heart Association. Albert was a true friend to so many. He loved drinking his HAMMS beer on a nice, sunny, warm day. He was an amazing man with a permanent smile that will be dearly missed by the whole community.

Albert Lee Chapman (Frog), age 78, of Edgerton, Kansas, passed away on Monday, March 16, 2020, at his home surrounded by his family. Albert was born on June 13, 1941 in Kansas City, MO, the son of Floyd and Pauline (Raw) Chapman. Albert spent... View Obituary & Service Information

The family of Albert "Frog" Lee Chapman created this Life Tributes page to make it easy to share your memories.

Send flowers to the Chapman family.