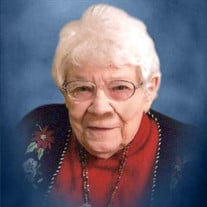 Anna Louise Precht, 95, of Kansas City, Kansas passed away December 14, 2019 at North Point Skilled Nursing. She was born April 21,1924, in Cairo, Mo. the daughter of Lawrence and Augusta Ellerbeck. On July 4,1947 she was united in marriage to the love of her life, Lionel Precht. She and Lionel owned and operated the Precht Feed and Sporting Goods Store in Argentine. She was a homemaker, raising her daughter at their country home. She cared for several family members during their final months/years. She was a Girl Scout Leader, a PTA President, a member at Emerson Christian Church, enjoyed playing Bunco and was an avid bowler. She volunteered for sixteen years at the Shawnee Mission Medical Center. Being a wonderful grandma, she and Lionel would take the kids to Bennett Springs to go trout fishing through the Summers and she also cared for each of her 4 great-grandchildren when they were toddlers. The couple enjoyed traveling together seeing many sites throughout the U.S. After his passing, she continued her travels with her siblings Marion and Edith as well as participating in National bowling tournaments. Louise has struggled with Dementia the last 10 years of her life, she will be deeply missed. She is preceded in death by her husband Lionel, sisters Marion Stinnett and Helen Gipson. Anna is survived by her daughter Lynn Green and husband Robert of Louisburg, KS; grandchildren, Sheila Thoele (Jeff) of LaCygne, KS and Rob Green (Heather) of Gardner, KS; and four great-grandchildren, Joshua and Danielle Thoele, Autumn and Logan Green; siblings Edith Beamer, Ethel Messer, Harlan Ellerbeck. In lieu of flowers, the family would appreciate donations be made to the Alzheimer’s Association.

Anna Louise Precht, 95, of Kansas City, Kansas passed away December 14, 2019 at North Point Skilled Nursing. She was born April 21,1924, in Cairo, Mo. the daughter of Lawrence and Augusta Ellerbeck. On July 4,1947 she was united in marriage... View Obituary & Service Information

The family of Anna Louise Precht created this Life Tributes page to make it easy to share your memories.

Send flowers to the Precht family.