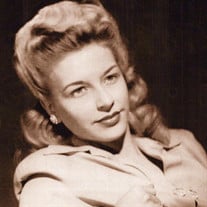 Betty J. Ibarra Lewis, 93 & 1/2 years young of Overland Park, Kansas, passed away on Friday, May 14, 2021. Betty was born on January 4, 1928, in Long Lane, Missouri to Everett and Edna Franklin. Betty is proceeded in death by her parents, husband, John Lewis, two sisters, Toby Gangwess, and Geneva (Sug) Priest. Three brothers, Jerome, Sylas, and Paul Franklin, daughter-in-laws Gale and Carol Ibarra, a son-in-law, David Hamilton, grandson Blake Shockley, and a nephew, Larry Franklin, and a niece, Patricia Phillips. Betty was the kind of aunt everyone dreams of having. She is survived by two brothers, Everett and David Franklin, two sisters, Darlene Cox and Ilene Franklin, five children, Anthony, Gus (Nancy), and Jerry Ibarra. Daughters, Deborah (Steve) Byrne and Denice Hamilton. Thirteen grandchildren and twenty great-grandchildren. In 1960, Betty and Gus Ibarra introduced Mexican cuisine to the Overland Park, Kansas area. It wouldn't take long before their restaurant, known as Los Ibarras, would take off and become the future. Betty opened up Torreon Mexican restaurant in 1967 and it is currently striving after her youngest daughter, Denice assumed ownership 40 years ago. Betty even made time to take on a job working as a Gray Lady at St. Mary's Hospital in the '70s. Betty had an amazing talent for working with people and making them feel special. She had a beautiful voice and sang on a local radio station with her sister, Sug, back in the '50s. All of that changed when the two sisters were asked to take their voices further and travel with the Musicians. The sisters had nine children between them and knew that their families were to be a top priority. Betty had a gentle, kind soul along with a smile and laugh that will be missed by so many. May her incredible life be a reminder to us all that one person CAN make a difference. In lieu of flowers, a contribution to your favorite charity would be Betty's wish. A visitation will be held at Maple Hill Funeral Home on Tuesday, June 1, 2021, from 9:00-10:00 A.M. A funeral service will begin at 10:00 A.M. with burial to follow at Maple Hill Cemetery,

Betty J. Ibarra Lewis, 93 & 1/2 years young of Overland Park, Kansas, passed away on Friday, May 14, 2021. Betty was born on January 4, 1928, in Long Lane, Missouri to Everett and Edna Franklin. Betty is proceeded in death by her parents, husband,... View Obituary & Service Information

The family of Betty J. Lewis created this Life Tributes page to make it easy to share your memories.

Send flowers to the Lewis family.