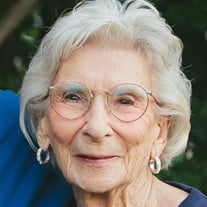 Betty J. Mixer, 98, was born August 5, 1922, and died on May 3, 2021, to be with the Lord immediately. She was born in Kansas City, KS, and attended Turner High School where she met her husband, Thomas Earl Mixer, Jr, who was “King of the Gridiron” for Turner High. (They were married for 65 years.) Betty was a cheerleader and president of her senior class. Some of the accomplishments she was most proud of were: being an official member of the American Rosie The Riveter Association for “Distinguished Service Rendered as a Working Woman of World War II” at a bomber assembly plant in Kansas City; being the mother of her 3 children and raising them to love the Lord; teaching the 5th-grade boys’ Sunday school class at Turner Baptist Church; leading the youth group at the church and taking the group on a mission trip to a Hope Indian reservation in New Mexico; and being an instructional aid in reading at Turner Elementary School until she was 86 years old. Betty often said, “Getting Old isn’t for Sissies.” Betty definitely was not a sissy and outlived many in her generation. To the end, her mind was sharp. She enjoyed communicating with her many friends by letters or phone calls. She had her favorite TV shows, kept up with the news and politics, and faithfully followed her hometown KC Royals and KC Chiefs teams. Betty was preceded in death by her parents, Cenith McWayne Jones and George L. Glaser; brother, Charles W. Glaser; husband Thomas Earl Mixer, Jr.; oldest son, Jack S. Mixer; and grandsons, Campbell Mixer and Mike Farrar. She is survived by her two children: John J. Mixer (Virginia) of Manhattan, KS, and Jean A. Mixer of Riverview, FL, plus five grandchildren: Amy (John) Franks, Jewell (Ross) Ferraro, Chris (Dana) Mixer, Jennifer (Greg) Benno, and Ali (Johnny) Campbell, and 13 great grandchildren. Betty’s homegoing will be at 10:00 a.m., Saturday, May 8, with family and friends at the First Baptist Church of Turner in KC. Live-streaming of the service may be viewed on the Facebook page: “First Baptist Church Turner.” In lieu of flowers, donations may be made to the church, the longtime spiritual home for both Tom and Betty and where they and Betty’s grandmother Jones were all baptized together following an revival service. Internment will take place at the Leavenworth National Cemetery at a later date.

The family of Betty Jean Mixer created this Life Tributes page to make it easy to share your memories.

Send flowers to the Mixer family.