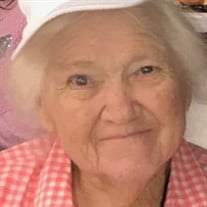 Betty Marie Satterfield, 85, of Hiawatha, KS, passed away Tuesday, March 3, 2020 surrounded by her family in Overland Park, KS.She was born February 11, 1935 in Lawrence, KS, the daughter of James Parish and Anne Harvey.Betty attended grade school until the sixth grade where she left to work as a press operator at the local hospital. She worked as a cashier for Walmart in Tennessee and Hiawatha, KS for seventeen and a half years. After retirement she volunteered at the Horton and Hiawatha Thrift Stores. Her favorite hobby was to collect salt and pepper shakers where she collected thousands of pairs. She loved going thrift shopping, garage sales, puzzles, and gardening flowers. When she could, she enjoyed traveling. Most importantly she enjoyed spending time with her family. Betty was married to Richard Cordell Satterfield until his passing in 1990. She later married David Daniel Buckridge Jr. in 1999 who preceded her in death in June of 2019. Including her two husbands she is preceded in death by her parents, James and Anne; a great grandchild, Paige Bostic; two sons, James "Jim" David Garrett Jr. and Robert "Bobby" Eugene Garrett; and seven siblings. She is survived by a son, Claude "Shorty" Francis Garrett of Nashville, TN; six grandchildren, Stacy Mackey (Cliff), Jeff Luoma (Julie), Kari Clary (Chad), Renee Bostic (Randy), James Garrett III (Heather), and Deana Watson (Dustin); daughter in law Linda Garrett; four siblings, Butch Parish, Ruth Moore, Francis Hamilton, and Vickie Mullins, and seventeen great grandchildren and two great great grandchildren. The will hold a celebration of life at 5:30 P.M. Saturday, June 13, 2020 at the Eternal Hope Worship Center, 410 E Iowa St. Hiawatha, Kansas 66434, with Pastor Richard Lehmkuhl officiating. Burial will be at a later date in the Elmwood Cemetery in Springfield, TN.

The family of Betty Marie Satterfield created this Life Tributes page to make it easy to share your memories.

Send flowers to the Satterfield family.