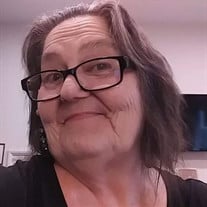 On Tuesday, April 14, 2020, Beverly Griffin, loving mother of 4 children, passed away at the age of 63. Beverly was born on January 18, 1957 in Kansas City, Kansas. Beverly had many interests and passions in life. She loved to draw pictures and paint images of things that inspired her creativity. She had music in her soul and loved to spend hours singing. She was skilled with her hands and made lots of beautiful things for others highlighting her knitting skills and ingenuity with arts and crafts. She found joy in playing many different games and she truly cherished her time playing them. Beverly took pride in being a lifelong Kansas City resident. She proudly supported the Kansas City Chiefs and even attended both super bowl parades to show her devotion to the team. You could always count on her watching the chiefs game and loudly cheering for every hard-earned point. Beverly was an inspiration to others around her. She had an inner strength that drove her to live life to the fullest and others were drawn to her. With her kind heart and love for helping others, every person she met would call her their friend. She freely gave to others in need and did so without hesitation. Her spirit has left an imprint on others hearts and she will be dearly missed. Beverly is preceded in death by her mother, Shirley, her father, Edward, her brother, Steven, and her son, Dustin. She is survived by her three daughters, Christy, Ashley, and Lova, three sisters, Debbie, Leasha, and Julie, and her brother Doug. She is also survived by her four grandchildren, Andrew, Bradlee, Rosalee, and Kingslee. Unfortunately, during this time, we are unable to hold traditional services to honor Beverly for all who loved her to gather together. Plans are being made to hold a celebration of life ceremony at a later time when all who wish to attend can do so.

On Tuesday, April 14, 2020, Beverly Griffin, loving mother of 4 children, passed away at the age of 63. Beverly was born on January 18, 1957 in Kansas City, Kansas. Beverly had many interests and passions in life. She loved to draw... View Obituary & Service Information

The family of Beverly Jean Griffin created this Life Tributes page to make it easy to share your memories.

Send flowers to the Griffin family.