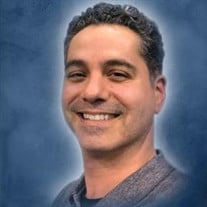 Brad Norman Farha, 47, of Olathe, KS passed away Monday, July 29, 2019 at Overland Park Regional Medical Center. Brad was born May 13, 1972 in Wichita, KS, the youngest son of Norman and Carol Farha. On May 22, 2000, in Hawaii, he married the love of his life, Heather Lynn Siemsen. Brad attended the Wharton School of Business at the University of Pennsylvania. He later transferred to the University of Kansas where he completed his degree in Business Administration and Environmental Policy. He received his MBA at Keller Graduate School of Management in Chicago. Brad has worked for Verizon in enterprise development as a Strategy Director since 2008. He took great pride in serving on the board of directors of Kansas City’s Sheffield Place, helping women and children make the difficult journey from homelessness to self-sufficiency. Brad was a loud and proud fan of his Alma Mater, the University of Kansas. He cheered for all KU sports teams, especially basketball and volleyball. Brad is survived by his wife of nineteen years, Heather; two daughters, Rowan Eve (15) and Brynn Arwen (10); parents Norman and Carol Farha; brothers, Al Farha (wife Becky Reed Farha) of Minneapolis, MN, and Cliff Farha of Wichita, KS; and many more relatives and great friends. The problem with amazing humans like Brad is that when they pass away, they leave behind an impossibly huge void. Brad, as we are fond of saying, was always unabashedly Brad. Brad was joy. He was enthusiastic about life and it showed in all his actions. He never stopped smiling, talking, laughing generously, and trying to entertain those around him. Brad was always present; lovingly and gleefully meeting all the challenges that life brings. He touched countless numbers of people with his vivacious spirit, humor, wit, and boyish charm. Brad had an outgoing, active, adventurous spirit with a thrill-seeking streak. He loved roller coasters and other daring rides, live music, cycling, working out, and being amongst friends. He was an enthusiastic fan of all things Marvel and enjoyed spending time in our home theater watching his favorite films. Brad would often tell people his name was “Thor.” Brad knew no strangers. If you crossed Brad’s path (at KU games, work, the girls’ schools, events and parties, Costco, our front lawn…) he would instantly treat you like a good friend. He was a brother to all, an ally to the disenfranchised and vulnerable, and an informed liberal. He wanted to help, to give, to enrich, to lift people up – to bring as much joy as he could into the lives of others. He was always playful and fun-loving; someone you could roll your eyes at but adore at the same time. He used his charisma to make others feel welcomed, included, and at ease. Brad placed real value in maintaining friendships. He reached out to people, made a point to include others, and recognized the good in everyone (with perhaps the exception of Mizzou fans. Ha!) Brad worked diligently to excel at his job and provide for his family. He was always guided by a strong moral compass, which he learned from his parents, and he didn’t deviate from what he knew was right. Brad humbly and unabashedly lived his best life. He embraced the meaning of adult responsibility without ever really growing up. He loved and adored his family with every ounce of his being. And he was loved back. It is impossible to say goodbye to someone like Brad. But we know his memory will live on in his many acts of kindness and through his legacy of joy that inspires us all. He lit up the world for the too-short time he was with us. Brad has now passed that mantle on to the rest of us. Thank you, Brad, for showing us how. A visitation for Brad will be held from 2:00 - 3:00 P.M. with a Celebration of Life beginning at 3:00 P.M. Saturday, August 3, 2019 at Maple Hill Funeral Home. In lieu of flowers, memorial contributions can be made to SOAR Special Needs Ministry @ http://bit.ly/Donate2SOAR.

The family of Brad Norman Farha created this Life Tributes page to make it easy to share your memories.

Send flowers to the Farha family.