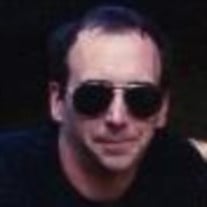 Brad D. Norman, 51, of Mission, KS passed away January 13, 2022 at his home. Graveside services will be 11 AM Monday at Maple Hill Cemetery. He leaves behind his mother Susan Seitz. His brother Brian Norman of Taipei, Taiwan. Brad experienced a lot of personal difficulties in his youth, but still achieved a lasting impact on KC and Lawrence underground musical culture that most of the punks he alienated – with either his personality or success – could only dream of. Brad loved art, expressing himself through music and theater: as a musician, a theater stage technician, a lighting designer, a student of theater and film, and finally as a filmmaker. He was a lover of all music. Before he went to college, he was the bassist and one of the leading members in a punk band that toured the United States and played many shows in the KC area. He later expanded on the connections he’d made in the punk world as a concert promoter of punk and rock shows at the Outhouse. The latter is a cinderblock building in the middle of a corn field just outside Lawrence, KS, (in)famous at the time. Brad got many well-known bands from around the country as well as local acts to play the Outhouse – making significant contributions to a wild – even harsh, if you’ve ever crowdsurfed or moshed– but thriving local and national musical culture. Brad liked to bring all kinds of people together, from the art kids to suburban depressives to unwashed gutter punks. He felt an affinity for them all. Despite being a fantastically non-traditional student, Brad got his bachelor’s degree in theater and film, and used that education to make the feature-length documentary The Outhouse: The Film about the club's heyday (1987-1995ish), where he’d once promoted so many concerts. He interviewed a huge number of locals involved in the scene to tell the Outhouse's story, and met with an endless number of famous figures who played there, including major recording artists like Ice-T, Ian Mackaye of Fugazi, and Henry Rollins. Making the film only increased the polarized views of Brad in the punk community, which Brad didn't mind one bit. At the time of his death, Brad had two film project ideas he was cultivating and planning the groundwork for. Brad loved his cats to pieces, democracy, playing records really loudly in the morning, authenticity, and music of all kinds, especially Frank Zappa in the last years of his life. If you knew him, he was something like a professor when it came to punk, The punk scene is not particularly gentle, and Brad made many friends as he navigated it. He was absolutely hilarious in person and writing, always ready with a witty comment that often contained a great deal of truth. He couldn’t stand big egos and took them down with ease. We’re all a little surprised he didn’t get into more fights. But if you knew Brad well, he had a huge heart filled with love. He was loyal to his family, his cats (Tooth and Nail) were his kids, and his friends were his brothers and sisters. This does not come close to doing him justice and he is sorely missed. His mother expresses her love with all her heart and with his quote, I love you and like you.

Brad D. Norman, 51, of Mission, KS passed away January 13, 2022 at his home. Graveside services will be 11 AM Monday at Maple Hill Cemetery. He leaves behind his mother Susan Seitz. His brother Brian Norman of Taipei, Taiwan. Brad experienced... View Obituary & Service Information

The family of Brad D. Norman created this Life Tributes page to make it easy to share your memories.

Send flowers to the Norman family.