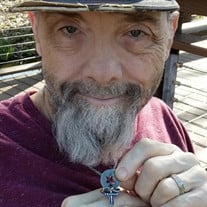 Brian Lowell Bivens, 61, of Overland Park, Kansas, passed away on Saturday, January 1, 2022. Brian was born on June 18, 1960, in Springfield, Missouri, the son of Leonard Bivens and Kay (Murphy) Delana. Brain graduated from Shawnee Mission Northwest in 1978, with multiple athletic scholarship offers. The Lord had the family path in mind for him though, with his first born Acacia joining the family in 1980, daughter Niki in 1981, and later son John in 1995. He married wife Bonnie in 1996, dedicating their lives to spreading the word of the Lord through missions in the US and a visit to the Holy Land of Israel in 2015. Brian is preceded in death by his father, Leonard and care-taking Aunt Betty. He is survived by his mother, Kay; his loving wife of the home, Bonnie (Bair) Bivens; son John (Disa Riley) Bivens, of Overland Park, Kansas; Loving ex-wife/mother of daughters Sylvia Ruiz. Daughters; Acacia (Nicholas) Ford, of Bixby, Oklahoma and Nicole Bivens, of Shawnee, Kansas; step-son Jeremy Reyes with children Lexie and Joshua; brother Brett Bivens with children Brandon and Jessica; sister Lori Holloway; care-taking Aunt Carolyn; cousin Aaron; and grandchildren Jackson Lucht, Ava Lucht and Oliver Ford. A visitation will be held on Thursday, January 6, 2022, from 1:00-2:00 P.M. at Maple Hill Funeral Home with a funeral service beginning at 2:00 P.M. Burial will take place immediately following the funeral service at Maple Hill Cemetery.

The family of Brian Bivens created this Life Tributes page to make it easy to share your memories.

Send flowers to the Bivens family.