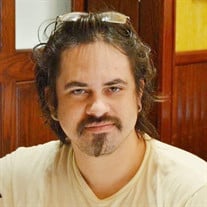 It is with great sadness that the family of Bryce Faisal Gaffar (31, of Overland Park, Kansas) announces his passing on February 2, 2020. Bryce attended Blue Valley Academy and received his diploma from Blue Valley Northwest in 2007. He served in the military and, after his discharge, Bryce earned his EMT certificate at Johnson County Community College. In the military, he served in active duty as a Private First Class C troop, 173rd airborne brigade combat team, 1st squadron (airborne), 91st Calvary regiment infantry soldier from 2009 - 2012. While stationed in Germany, he was deployed to Afghanistan. During this time, he earned The Army Achievement Medal for exceptional performance as assistant motar gunner and rifleman, the Non Article 5 NATO Medal, and was entered onto the rolls of the Airborne Calvary Order of the Spur and issued a pair of Calvary Combat Spurs for his duty during Operation Enduring Freedom. Bryce enjoyed and loved many things. From riding motorcycles, performing magic tricks, listening to, playing and creating music on the guitar, drums, violin and his grandfather's piano. Bryce befriended a variety of animal companions, including a sugar glider. However, his most treasured friendship was with his beloved support dog Erza. More than anything, Bryce cherished being with his friends and family. He adored his niece Savannah and loved being a father. Bryce was known for his charm, wit, and funny personality. He had a great sense of humor, and most of all, took pride in protecting the ones he loved. Bryce is survived by his mother Janet G. Gaugh; siblings Iljana M. Lucarelli (Giuseppe), Sabaria S. Christie (JD and Savannah), Vance U. Gaffar and Alyschia K. Gaffar; grandparents Vance and Marjorie Meinecke; two daughters and his beloved dog Erza. A visitation will be held on February 12, 2020 beginning at 9:30 am followed by a funeral service at 10:30 am at Colonial Presbyterian Church (Wornall campus) in Kansas City, Missouri. Graveside services on February 12, 2020 will begin at 1:30 pm at Leavenworth National Cemetery in Leavenworth, Kansas with full military honors. In lieu of flowers, memorial contributions can be made out to his family. Contributions can be made at the funeral, via PayPal ([email protected]) or sent via mail. Also please share pictures, memories, videos. For those who are able to attend the events on Wednesday, February 12, there will be an open eulogy at the funeral service if you would like to participate. There will be a memory table to collect momentos, pictures, letters, etc that you would like to share with his family. There will also be a reception Wednesday evening at his mother, Janet Gaugh's house.

It is with great sadness that the family of Bryce Faisal Gaffar (31, of Overland Park, Kansas) announces his passing on February 2, 2020. Bryce attended Blue Valley Academy and received his diploma from Blue Valley Northwest in 2007. He served... View Obituary & Service Information

The family of Bryce Faisal Gaffar created this Life Tributes page to make it easy to share your memories.

It is with great sadness that the family of Bryce Faisal Gaffar...

Send flowers to the Gaffar family.