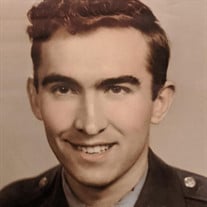 Carl Donald Brewster, 88, of Kansas City, KS passed away Sunday, April 5, 2020 at his home. Direct burial will take place Wednesday, April 7, 2020 at the Maple Hill Cemetery. Mr. Brewster was born May 15, 1931 in Princeton, WV to Carl Sanford Brewster and Finnie Thomas Brewster. Carl Donald lived in Kansas City, KS since 1958.He served in Korea for the Army Air Corps from 1950-1953. He graduated from Donnelly College in 1964 with an Associates of Science degree, Columbia College with a Bachelor of Arts degree in 1981, and Webster University with a Master of Arts degree in 1983. He was a railroader for Virginian Railway Company in Princeton, WV for ten years, General Foreman for the Union Pacific Railroad for 30 yrs in Kansas City, and Railroad Safety Inspector for the Federal Railroad Administration for five years until retirement. He was married to the late Beulah Mae (Snider) Brewster for fifty two years. Survivors include his son, Steven Michael Brewster, wife Janis Elaine Park Brewster; two grandchildren, Silver King Brewster and Emerald Starlane Brewster-Given; and four great grandchildren, Mercury King Brewster, Topaz Stardust Brewster, Scarlet Rose Given, and Jett Canyon Given, all of Kansas City, Kansas. Carl Donald asks that instead of sending flowers for all his relatives and friends to remember him in their prayers and just remember him as a railroader that would please him so much.

Please leave messages of condolences on this website for the family to read.

Send flowers to the Brewster family.