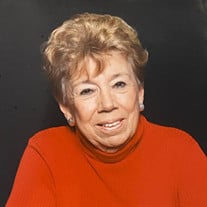 Carlene White, 95, of Kansas City, Kansas passed away Thursday, March 31, 2022 at Sunrise Senior Living in Lenexa, Kansas. She was born February 17, 1927 in Kansas City, Kansas the daughter of Carl and Margaret Smith. Carlene owned and operated her own business, White Associates TemTech for 27 years until retirement. In 1995 Carlene met the love of her life, Bob Johnson. They met at the very table they sat at every Wednesday night in the Oasis Café, which was called Taco Tuesday Night. She and Bob were both only children. They were heavily involved in the Shrine for the last 25 years where they made many friends together. She is preceded in death by her parents. Carl and Margaret Smith; significant other Bob Johnson; and first husband Robert White. She is survived by three children Robert S. White (Debbie) of Michigan, Peggy Ade (Jim) of Overland Park, Kansas; and Carl J. White (Tanya) of Shawnee, KS; grandchildren, Alan White, Lauren White, Shannon Rimbo, Megan Liley, Jessica Kee, and Joshua White; great grandchildren, Tate, Kylee, Alaina, Mya, Peyton, Adi, Avery, and Astrid; and two great grandchildren expected Allistair in April and Harper in May. A visitation will be held from 9:00-10:00 AM with a Celebration of Life beginning at 10:00 AM Saturday, April 9, 2022 at Maple Hill Funeral Home.

The family of Carlene White created this Life Tributes page to make it easy to share your memories.

Send flowers to the White family.