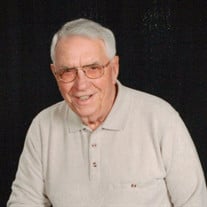 Charles (Bo) McBee, the oldest son of James McBee and Ethel Baynes, passed away on Sunday, March 7, 2021, after a short but courageous battle with cancer. Charles was born on August 24, 1932, in the front bedroom of his grandmother's home in the Armourdale neighborhood of Kansas City, Kansas. He attended St.Thomas Grade School and Bishop Ward High School, leaving in his sophomore year to go to work and help support the family. He later attained his GED while serving in the Armed Forces. He worked for 44 years as a clerk in the railroad industry, starting his career with the Rock Island Railroad, which merged with the St Louis Southwestern Railroad and then with the Southern Pacific. He liked to quip that he worked for four different railroads and never changed desks. He also spent many years working a second full-time job as a billing clerk at Jones Trucking. Charles was a proud veteran of the United States Navy from 1952 to 1956, serving as a 3rd Class radioman aboard the USS Midway during the Korean Conflict. During this time he made a Mediterranean Cruise and a World Cruise, among many other cruises. After his active service, he served in the Navy Reserves until 1960. In 1952 Charles married Shirley Terry and during their twenty-one years of marriage, they raised six children who survive him, Michael Charles McBee (Patricia), Paula Beth Galliart (Michael), Kathy Ann Butler, James Brian McBee (Kim), David Patrick McBee (Dana), and Steven Richard McBee (Kim). In 1992, Charles married Regina (Lynch) Gillette and the blended family added three step-children whom Charles came to think of as his own. John Thomas Gillette (Mary Jane), Bridget Renee Kieras (Dave), and Barbara Jean Miesner (Dale). The blended family also includes grandchildren Ryan, who passed away in December 2020, Brett Edwards (Tonya), Allison Rice (Bryan), Annie McBee, Bridget McBee, Kendall Lee (Kenny), Krista Summers (Walter), Megan McBee, Jeffrey McBee, Amber Harrington, Angel Gillette, John Riley Gillette, Kyle Miesner, and Danielle Miesner, and Great Grandchildren Meara Edwards, Fiona Edwards, August Rice, Parker Lee, Rylee Rothrock, Henry Summers, and Baby Boy Lee expected in April. There was also a very special place in his heart for Loretta Lynn Miller who called him grandpa. Also, surviving are his sisters Patricia Smith and Ethel Golubski, sister-in-law Sara McBee, and many extended family members. In addition to his parents, Charles was preceded in death by Shirley McBee, brother James McBee, sister Frances Rush, and grandson Ryan McBee. Charles was a member of St Mary's / St Anthony Catholic Church and a lay member of the Little Sisters and Little Brothers / Community of the Lamb. He was also a member of American Legion Post 0188, a Lifetime Member of the Midway Veterans Association, and a Lifetime Member of the Korean War Veterans Association. Visitation will be held at St Mary St Anthony Catholic Church, Kansas City Ks on Saturday, March 13, 2021, from 9 am-11 am with a rosary being said at 9:15 am. The Mass of Christian Burial will follow immediately. Interment will take place at Gates of Heaven Cemetery 126th and Parallel in Kansas City Kansas immediately following the service. In lieu of flowers the family requests donations to the Little Sisters and/or Little Brothers of the Lamb, 36 So Boeke, Kansas City KS 66101 or St Mary St Anthony Catholic Church, 632 Tauromee, Kansas City KS 66101. The family would like to thank Amedisys Hospice Care and especially Nurses Patrick, Beverly, and Theresa for their care and devotion to Charles and other terminally ill, and Ryan at the Midwest Respiratory and Rehab Medical Supplies, and the extended family members and friends who supported Regina and the family during this difficult time. “OLD SAILORS NEVER DIE, THEY JUST SAIL AWAY”

Charles (Bo) McBee, the oldest son of James McBee and Ethel Baynes, passed away on Sunday, March 7, 2021, after a short but courageous battle with cancer. Charles was born on August 24, 1932, in the front bedroom of his grandmother's home... View Obituary & Service Information

The family of Charles McBee created this Life Tributes page to make it easy to share your memories.

Send flowers to the McBee family.