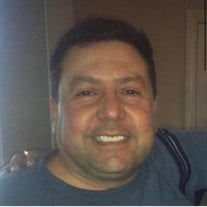 It is with extreme sadness, deep sorrow, and many regrets that we buried our eldest brother “Conrad”, age 54, last Wednesday, April 15, 2020. He finally lost his battle with addiction, which misguided his trusting judgment eventually leading to his passing. He was born and raised in Kansas City, studied at Pittsburg State and the University of Kansas, where he graduated with a degree in Advanced Spanish Literature. His incredibly social and outgoing personality helped him befriend everyone he ever met wherever he ventured. He was born on November 9, 1965 in Kansas City, Kansas to Conrado Mendez, Sr. and Aurora Muñoz Mendez who are now reunited with him in heaven. He is survived by his four siblings and their families: Ana Rosa Keith Mendez – her spouse, Timothy E. Keith, and their three sons, Timothy A., Samuel, and Luke; Alejandro Mendez, Sr. – his son and daughter, Alejandro Jr., and Marisa; Eduardo Mendez – his son and daughter, Venicio and Mia; and Daniel Mendez – his wife Sarah Hernandez, and their three children, Elijah, Daniel, Jr., and Sariah. In closing, we would like to thank everyone who has helped us honor him in death. It was clearly evident how much he was loved with the outpouring of everyone’s support and generous contributions for his funeral. He is buried with our parents at Maple Hill Cemetery. Our final step is to order his gravestone and make a donation to a local shelter in his name. During these difficult times it has lifted our hearts, to know that the infectious smile that we had always embraced as a family, was also embraced by everyone who had ever befriended him.

It is with extreme sadness, deep sorrow, and many regrets that we buried our eldest brother &#8220;Conrad&#8221;, age 54, last Wednesday, April 15, 2020. He finally lost his battle with addiction, which misguided his trusting judgment eventually... View Obituary & Service Information

The family of Conrado Mendez Jr. created this Life Tributes page to make it easy to share your memories.

It is with extreme sadness, deep sorrow, and many regrets that...

Send flowers to the Mendez family.