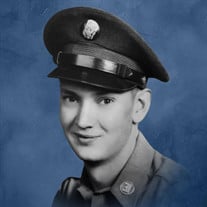 Dallas Wayne Brown, or “Bug” as his family called him, passed away at the age of 90 in Kansas City, Kansas, on June 7, 2022. Dallas was visited and comforted by family members in the days leading up to his passing. Dallas was born in Oark, Arkansas, in 1932 to the late King and Pearl Brown. One of six children, he was predeceased by his brothers, Vivan Brown (Ruth Brown), Hoyote Brown (Dorothy Brown), Dwayne Brown (Dottie Brown), and his sisters, Shirley Tankersley (Dick Tankersley) and Shelby Melson (Eugene Melson). His grandson, Steven Orndorff, also preceded him in death. He is survived by his two daughters, Marsha Orndorff (David Orndorff) and Vickie Lagle, six grandchildren, 11 great grandchildren and many nieces and nephews. Dallas joined the army in 1950. Stationed stateside at Area 51, he was an atomic veteran, a title he earned as an American military service member who was exposed to nuclear tests between 1945 and 1962. After being honorably discharged from the army, he moved to Kansas City, where he met and married the late Laurel Jeanette Brown in 1957. They were married for 54 years. During that time, beginning in 1959, Dallas became a Kansas City Kansas firefighter, where he rose to the rank of Captain. He retired in 1994 after 34 years of service. Dallas enjoyed traveling, camping with friends and spent many hours trolling for white bass at the Lake of the Ozarks. He remarried in 2017 to Gloria Brown at the Little White Wedding Chapel in Las Vegas, Nevada. A man who never met a stranger, Dallas will be dearly missed by family, friends, and all who knew him. A visitation will be held at 10 a.m. on Monday, June 13, 2022, at the Maple Hill Funeral Home, followed immediately by a celebration of life at 11 a.m. Guests are invited to join the family in a reception afterward at Roeland Park Community Center: 4850 Rosewood Dr. Roeland Park, Ks 66205. In lieu of flowers, that family has requested that donations are made to the KCKFD Relief Association.

Dallas Wayne Brown, or &#8220;Bug&#8221; as his family called him, passed away at the age of 90 in Kansas City, Kansas, on June 7, 2022. Dallas was visited and comforted by family members in the days leading up to his passing. Dallas was born... View Obituary & Service Information

The family of Dallas Wayne Brown created this Life Tributes page to make it easy to share your memories.

Dallas Wayne Brown, or “Bug” as his family called him, passed...

Send flowers to the Brown family.