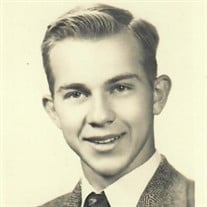 Darrel Wayne Frogley, 85, from Kansas City, Kansas passed away peacefully at his home with his loving family on March 23, 2020, after a brief illness. At this time no services are planned. A remembrance celebration will be planned for a future date. Darrel, the only child of George Wayne and Pauline (McRae) Frogley, was born in Chetopa, Kansas on April 21, 1934. He was orphaned at an early age and raised by other family members. He overcame his difficult situation to graduate early from Labette Co. Community H.S. in Altamont, Kansas as valedictorian, a state champion miler, and captains of both the football and basketball teams, where he was also known affectionately as “Frog.” He obtained an associates’ degree from Parsons County Junior College, where he also played on the college football and basketball teams. On June 2, 1956 he married the love of his life, Betty Colleen Straub, of Valeda, Kansas, his high school sweetheart. After a short stint in the Army, including service in Germany, he graduated from Kansas State University and taught English and History in the Kansas City area before going to night law school to become a lawyer. He received his law degree from the Kansas City School of Law in 1968, and practiced law in Kansas City, Kansas until his death, primarily serving those who were unable to afford a lawyer. Those who knew Darrel knew how much he loved Betty. He often remarked that it was so nice to introduce her as his first and only wife. He was also so proud of his five daughters, quipping that the only thing better than having five daughters would have been to have had six. An avid K-State fan, along with Betty, he also loved to tease the daughters who chose to attend that other school, the University of Kansas. He enjoyed reading, cooking, traveling and genealogical research, tracing the Frogley family line back to Denchworth, England some 16 generations. Darrel is survived by Betty, his wife of 63 years, and his five daughters, Cynthia Norton and spouse George, Parkville, Missouri; Kirsten Frogley, Shawnee, Kansas; Julie Way, Shawnee, Kansas; Celia Duran, Olathe, Kansas; and Martha Frogley, Shawnee, Kansas. He also is survived by his seven grandchildren, Lynelle Grimes and spouse, Joshua Smith, Mesa, Arizona; Kyle Grimes and spouse, Ashley, Lawrence, Kansas; Chad Way, Shawnee, Kansas; Cameron Way, Denver, Colorado; Kayla Latham and spouse, Alex, DeSoto, Kansas; Brock Duran, Kansas City, Missouri; and Jared Duran, Lawrence, Kansas; and two great-grandsons, Everett and Sawyer Smith, Mesa, Arizona. In lieu of flowers, memorial contributions may be made to the Salvation Army or the Red Cross. Online condolences may be expressed at www.MapleHillFuneralHome.com.

Darrel Wayne Frogley, 85, from Kansas City, Kansas passed away peacefully at his home with his loving family on March 23, 2020, after a brief illness. At this time no services are planned. A remembrance celebration will be planned for a... View Obituary & Service Information

The family of Darrel Wayne Frogley created this Life Tributes page to make it easy to share your memories.

Send flowers to the Frogley family.