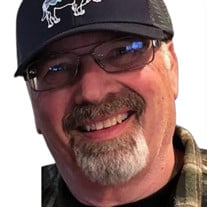 Daryl Wayne Steele. 70, of Shawnee, KS passed away Tuesday, March 2, 2021 at his home. He was born the son of John “Harry” and Delores (Steimetz) Steele in Kansas City, KS on November 14, 1950. On November 21, 1997 he was united in marriage to the love of his life, Patti Mitchell. Daryl enjoyed the outdoors, especially fishing and going to his cabin. He enjoyed picking on his nine grandchildren and loved being their “Poppo”. He was a sign maker by trade and proudly owned his own sign making business. He is preceded in death by his father, John H. Steele and a brother, John L. Steele. He is survived by his wife of 23 years, Patti Steele; mother, Delores Steele; four children, Jeffrey Steele (Denise), Michael Harvey (Ashley), Thomas Harvey, and Leanna Zimmerli (Ben); nine grandchildren, Maggie, Logan, Ocean, Ever, Nash, Lila, Jace, Brock, and Tate; his faithful companion “Jack” and many other family members and great friends.

The family of Daryl Wayne Steele created this Life Tributes page to make it easy to share your memories.

Send flowers to the Steele family.