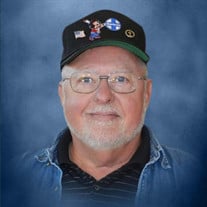 David Delmer Warner, 77, of Shawnee, KS passed away Friday, March 12, 2021 at St. Luke’s Hospital surrounded by his family. A visitation will be held from 10:00 - 11:00 A.M. with a Celebration of Life beginning at 11:00 A.M. Saturday, March 20, 2021 at Maple Hill Funeral Home. Services will also be live streamed at https://fb.me/e/1CAkdng0K In lieu of flowers, Dave was passionate about providing fresh water wells to villages in India, please consider donating to the Dave Warner Memorial Well with this link https://angelhouse.me/fundraisers/in-memory-of-dave-warner David was born the son of Dugan Dale Warner Sr. and Monica Irene Warner on December 16, 1943 in Falls City, Nebraska. On October 16, 1965 he was united in marriage to the love of his life, Pam Warner. David proudly served his county in the United States Army. After his service he began a career with BNSF Railroad where he retired after 38 years. Dave was the self titled “free guy” at his family business, Airparts. He, Pam, and family would travel twice a year with the business to trade shows in Florida and Wisconsin. He and Pam loved to camp. They had a favorite spot in the mountains of New Mexico where they camped and fished twice a year for 35 years. When he wasn’t traveling, you could find him eating breakfast on Friday and Saturday with his friends, which has been a tradition for over thirty years. Dave most importantly cherished spending time with his family. He is preceded in death by his parents and two brothers. He is survived by his wife of 55 years, Pam; two children, Christine Whitney (Dustin) and Mark Warner (Cara); four grandchildren, Caitlyn Smith (Markus), Dillon Whitney, Nathan Warner, and Sophie Warner; and great granddaughter, Mila Smith.

The family of Dave Warner created this Life Tributes page to make it easy to share your memories.

Send flowers to the Warner family.