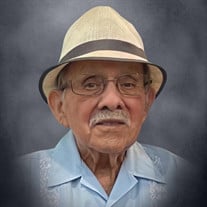 David A. Vega, 95, of Kansas, City, Kansas, passed away peacefully in his home, on June 6, 2022, with his loving family by his side. David was born on April 13, 1927, in Kansas City, Kansas, to Joseph and Esperanza (Alvarado) Vega, and raised in the Argentine community, where he was a lifelong resident. He married the love of his life, Armella Vallejo, on May 4, 1944, and together they raised 6 children. July 1945, he was called upon to defend his country, and was enlisted into the United States Army where he served in the 78th division, 310th Infantry, 131st Quartermaster Truck Company, serving in Berlin, Germany during World War II. He was honorably discharged in July 1946. After returning from the war, he earned his trade as an auto mechanic from Stevinson Auto & Electrical School. In 1951, he was offered to take over the lease of the Texaco Gasoline Station at 26th and Strong, where he had previously worked, and for twenty-nine years, successfully operated his business. In 1968, he was the first Hispanic to run and be elected to a political office in Kansas City, Kansas. He was appointed as a commissioner of the Kaw Valley Drainage Board, and later served as the superintendent of the commission until he retired from that position in 1995. David was dedicated to public service during his lifetime. He served on numerous boards and committees, such as, El Centro Inc., Area Agency on Aging, Board of Education, Urban renewal community development projects through the Villa Argentina organization, Housing Authority, Cross-Lines Board, American GI Forum, a charter member of the American Legion Post 213 Eagle's Nest, just to name a few. In recognition of his public service and dedication, on April 4th, 1991, the park located at 24th & Metropolitan was renamed Vega Field in honor of David Vega, under Resolution 37325, issued by the city of Kansas City, Kansas government. David and Millie were married for 73 beautiful years, before her passing in 2017. They raised six children with a dedication to God, filled with love, respect, and the importance of family. They were also active in the care and raising of their many, many grandchildren, great-grandchildren, and great-great grandchildren. He loved cooking, creating his own recipes, took great pride in his gardening and yard, which he always kept pristine and manicured, building things, and could fix just about anything, especially when it came to cars. Shopping was one of his favorite past times, as well as, dining out. He could always be found at Village Inn, Bob Evans, Longhorn Steakhouse, or Rosedale Barbecue, where he could spend hours just people watching. In his younger days, he enjoyed golfing, Mexican music, and dancing with his beloved bride. God and family were always his priority. Prior to Covid, he faithfully attended mass six days a week. Sunday mornings were always his favorite. He would make a big Mexican breakfast and have menudo and Mexican bread ready, with the anticipation of having family, and any friends that wanted to stop by after Church. He is preceded in death by his wife of 73 years, Armella “Millie” Vega; son, Patrick E. Vega, Sr. ; sisters, Irma Lopez and Amparo Salazar; and 5 great-grandsons. He is survived by his sons, Daniel J. Vega, David A. Vega (Cheryl), and Conrad S. Vega, Sr.(Toni); daughters, Cynthia A. Ortiz (Bob) and Regina Vega; brothers, Joseph, Michael, George, Richard and Javier Vega; sister, Teri Vega-Parson; 19 grandchildren, 43 great-grandchildren and 8 great-great-grandchildren. A visitation will be held from 6-8 pm on Monday, June 13, 2022, at St. John the Evangelist Church. Catholic Mass will be at St. John the Evangelist Church on Tuesday, June 14, 2022 at 10am. Burial will follow at Maple Hill Cemetery. In lieu of flowers, please consider making a donation to Bonner Springs Special Olympics at https://secure.e2rm.com/registrant/startup.aspx?eventid=377638, or St. Mary's Food Kitchen in care of Our Lady of Unity Catholic Church, 2646 South 34th Street, Kansas City, KS, 66106.

David A. Vega, 95, of Kansas, City, Kansas, passed away peacefully in his home, on June 6, 2022, with his loving family by his side. David was born on April 13, 1927, in Kansas City, Kansas, to Joseph and Esperanza (Alvarado) Vega, and raised... View Obituary & Service Information

The family of David A. Vega created this Life Tributes page to make it easy to share your memories.

Send flowers to the Vega family.