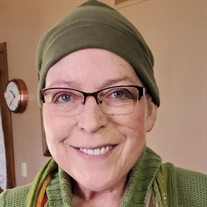 Per family wishes, services are postponed and will be held at a later date. Debra Lynn Delamaide Jacobs of Overland Park died peacefully on February 27 at the Kansas City Hospice House after three years of fighting cancer. She was much beloved by her family and friends for her kindness, her intelligence, her infectious sense of humor, her resilience, and, especially in coping with her illness, her courage. She maintained many close friendships over decades and was devoted to her daughter, Julia. Debbie was born in St. Louis, Missouri, on August 30, 1956, the third child and only daughter of William Darras Delamaide and Lillian Lucille Delamaide nee Lanham. Her father, Bill, was a lawyer and CPA and took a job as office manager for McKee Realty in St. Louis when the family moved there. Her parents divorced in 1960, and Debbie returned with her mother and two brothers, Darrell and Darras, to Pittsburg, Kansas, where her mother went back to her former profession as a switchboard operator. All three children attended St. Mary’s Catholic schools, though Debbie switched to Pittsburg High School and graduated from there in 1974. She very much enjoyed reconnecting to old friends at the PHS reunion last year. Debbie attended University of Kansas and later continued her studies at Wichita State University. She worked briefly in Chicago before returning to Wichita to work for Coleman. She continued working in Human Resources, going to Kentucky to work for Long John Silver’s and then to Kansas City, where she worked for Rival, the company that makes Crockpots. She married Paul Jacobs in 1992 and their daughter, Julia, was born in 1993. The couple divorced amicably in 1996. Julia lived with her mother but kept in close contact with her father, who continues to live in the Kansas City region. Debbie became a specialist in mortgage finance, working at a succession of banks amid a consolidation of the industry that brought several mergers. Debbie enjoyed playing cards with Julia and watching television together. She loved books, especially murder mysteries and nonfiction books about World War II. She was a fan of the Kansas City Chiefs and cheered when they won the Super Bowl in January. Attending the wedding of her niece Danielle last October in Wichita was a highlight for Debbie. She took part in the festivities and enjoyed mixing with the large crowd of invited guests. Both of Debbie’s parents predeceased her. She is survived by her daughter, Julia Jacobs, of Overland Park; her brothers, Darrell Delamaide of Washington, D.C. and Darras Delamaide of Livingston, Texas; and by her nieces Amy Delamaide, currently in London with the State Department; Dr. Joy Delamaide Gasper of Madison, Wisconsin (and two grand-nephews); and Danielle Delamaide Pulliam of Tulsa, Oklahoma.

Per family wishes, services are postponed and will be held at a later date. Debra Lynn Delamaide Jacobs of Overland Park died peacefully on February 27 at the Kansas City Hospice House after three years of fighting cancer. She was much beloved... View Obituary & Service Information

The family of Debra Lynn Delamaide Jacobs created this Life Tributes page to make it easy to share your memories.

Per family wishes, services are postponed and will be held at...

Send flowers to the Jacobs family.