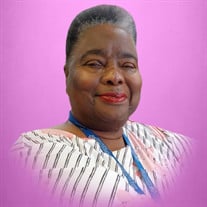 Homegoing Celebration for our Queen: Earline E Jenkins. On March 17, 2022, Earline Evon Jenkins received her wings and went to walk with the angels. She was 70 years old. Born June 27, 1951 to the union of Ellarine and Thurman Jenkins. She was raised by her mom, Ellarine, and Lorand Small. Earline was the youngest of 8 children. She was predeceased by her parents, 3 sisters (Clarice Angelo, Herrice Smith, & Imogene Fields) and 2 brothers (Charles Durham Sr. & Herman Durham). In 1969, Earline graduated from Wyandotte High School. After graduating, she decided to pursue a career in healthcare, working at KU Medical Center for 32 years. She started her career as a Certified Nurse Assistant (CNA) at 18, eventually transiting over to a Registration Clerk in the Emergency Room. Earline was a caring and loving mother, grandmother, sister, aunt, cousin, & friend. She would give you the clothes off her back if you could fit them. There was nothing she wouldn't do for her "one and only" son John (JD). Earline would get a burst of energy when her grandchildren would visit and it made her day with their many phone conversations. She loved her one-on-one talks with her grandson JJ and loved when he would just call her up just to say, "Grandma, I Love You". When her granddaughter Shyia called, she smiled and said "My Little Diva Called Me." Earline loved to enjoy life, shopping, listening to music, and riding around the town. Earline was a member of Amazing Grace with Pastor Bernard Johnson. Earline is survived by her son John Welchen Sr., 2 grandchildren (John Welchen Jr. and Kashyia Welchen), 3 sisters (Dorothy Fain, Mattie Franklin, & Vanessa "Diane" Welchen), surrogate mother (Mother Viola Yeager), and a host of nieces, nephews, cousins and great friends. A visitation will be held from 1:00-2:00 PM with funeral services beginning at 2:00 PM Friday, March 25, 2022 at Maple Hill Funeral Home. Burial will follow at Maple Hill Cemetery. A Livestream will begin at https://fb.me/e/3qG0YEYAA

Homegoing Celebration for our Queen: Earline E Jenkins. On March 17, 2022, Earline Evon Jenkins received her wings and went to walk with the angels. She was 70 years old. Born June 27, 1951 to the union of Ellarine and Thurman Jenkins. She... View Obituary & Service Information

The family of Earline Jenkins created this Life Tributes page to make it easy to share your memories.

Send flowers to the Jenkins family.