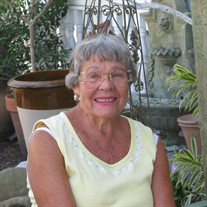 Eula N Manfield (Simpson) 88 of Lenexa, KS passed away Tuesday September 15, 2020. Funeral services will be Friday, September 18, 2020, at 2:00 p.m. at Maple Hill Cemetery. Eula was born on October 25, 1931, in Kansas City, KS the daughter of the late Louis B and Rose L (Bowlin) Simpson. She was a 1949 graduate of Argentine High School and affectionately known as “Bug” by her classmates. Eula was employed by First State Bank of Armourdale for 17 years. She then joined Braniff International Airlines in the Budget Dept. eventually becoming Director of Budgets where she remained for 25 years, first in Kansas City, then in Dallas, TX. Eula especially enjoyed her years working for Braniff as is afforded her the opportunity to make so many friends and she was able to travel the world. She loved telling the stories of all of her travels and was especially fond of her trips to Germany. After retirement in 1991 she joined her late friend Ruth Johnson performing estate sales for 15 years. She enjoyed working with antiques and the thrill of finding many hidden treasures. Eula was also a great cook & always said cooking was her therapy. Whenever she needed a mental escape to the kitchen she went. She was known as the “pie lady” among her friends and neighbors, always baking pies, cookies and cakes. We promised her we would carry on her legacy. The real light of her life was spending time with her two sons and their families, especially when that time was spent in Florida. Retirement saw Eula spending 25 wonderful winters in Ft. Lauderdale, FL at Cliff Lake Villa’s where she leaves behind many longtime friends. Eula was preceded in death by her parents and former husbands Buddy Cossey 2003, Robert McCray 1978, and Eugene Manfield 2008. Eula is survived by sons Robert (Sher) Cossey and Donald Cossey. Granddaughters, Samantha and McKenna Cossey. Grandsons Jesse (Hayley) Rasmussen and John (Brittney) Taylor, and 7 greatgrandchildren. She is also survived by her only sister Nora Wardwell, 5 nieces and nephews. Stepson Mark (Karen)Manfield, stepdaughter Deanne (Harvey) Gilbert, 4 step-grandchildren and 2 step greatgrandchildren. Eula is also survived by her granddogs which she adored and was so proud of, Duval, Havana and Toto. The family extends a special thank you to Eula’s dear friends and neighbors, Jean Heatwole, Louise Mackenzie and Stan and Marlene Hall for all their help and support during Eula’s long battle with cancer. Eula requests the services be casual (preferably tropical), and a true celebration of a life well lived. She would be the very first person to tell you she was blessed to have a long and wonderful life and her favorite saying was “I did it my way”. To the bitter end we always had the same goodbye, we’d say “See you later alligator” and she always replied “After while crocodile”. Her spirit, kindness, love & generosity will be missed greatly by all those who were lucky enough to know her. In lieu of flowers Eula and family request that donations be made to KU Cancer Center, 1220 W 110th St, Overland Park, KS 66210 or Great Plains SPCA, 5424 Antioch, Merriam, KS 66202.

The family of Eula Manfield created this Life Tributes page to make it easy to share your memories.

Send flowers to the Manfield family.