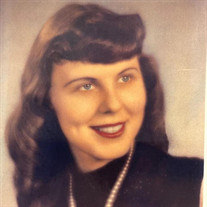 Farol J. Bale of Kansas City, KS went home to the Lord on August 4. She was the daughter of Henry E. Pankratz and Verna Schroeder Pankratz of Hillsboro, KS. Surviving relatives are husband Lawrence (Larry) J. Bale, daughter Jami J. Bale, and brother H. Stuart Pankratz as well as several nieces and nephews. A graveside service will be held on August 10, 2020 at 10:00 am at the Maple Hill Cemetery. Born in Hillsboro, KS she spent some of her early childhood in Lehigh, KS and most of her later childhood and teenage years in Hillsboro. Farol was a gifted musician whose primary instruments were pipe organ and piano. At an early age she performed regularly throughout her teenage years on both of her instruments at First Mennonite Church of Hillsboro. As a graduate of Hillsboro H.S. Class of 1948, throughout her time there she was the primary accompanist for band and choral ensembles and soloists. She also played clarinet in the band and was a drum majorette and cheerleader. Farol graduated in 1952 from Bethany College of Lindsborg, KS with a Bachelor of Music Education. During her college years she continued as organist at her home church and was a Life member of the Sigma Alpha Iota music fraternity, and the Sigma Phi Omega sorority. She went on to become the band and choral teacher at Durham, KS for the elementary-high school levels for two years and taught private music lessons. On May 8, 1953 she married Larry Bale. After he returned home from service as a pilot in the Korean War, they moved to Maine where he was stationed at Loring AFB. While there, Farol served as the base chapel choir director and organist. Upon completion of Larry’s active duty, they moved to Lawrence, KS where he pursued his master’s at KU while Farol worked in the Admissions office and pursued further organ studies. In 1957, the couple moved to Kansas City, KS and Farol was hired as a 1st grade teacher at Parker Elementary School for 5 years. Upon the birth of her daughter, she chose to be a stay at home mom but continued to serve at Jami’s school as a volunteer tutor to students needing assistance with reading skills. She was a lifelong dog lover, rescuer, and advocate for homeless animals. In lieu of flowers, the family requests donations in her memory to Great Plains SPCA of Merriam, KS, Old Mission UMC of Fairway, KS, or the music ministry of First Presbyterian Church of Pittsburgh, PA.

The family of Farol J. Bale created this Life Tributes page to make it easy to share your memories.

Send flowers to the Bale family.