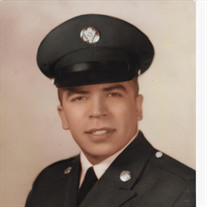 Frank Carlos Bustamante, 81, of Kansas City, KS, passed away on Tuesday, August 25, 2020. Born on October 8, 1938, in Kansas City, KS, Frank was the son of Jesus Bustamante and Guadalupe Contreras. Frank graduated from Argentine High School and later earned an Associates degree from Pittsburg State University. He served in the U.S. Army for four years, during which time Frank had the opportunity to tour Europe. While there, he played basketball on the U.S. Army goodwill team that helped promote the game in several countries. On June 19, 1965, Frank married the love of his life, Teresa. The two recently celebrated 55 years of marriage. Frank spent most of his career working for the U.S. Department of Housing and Urban Development, and he was based in the Kansas City-area. He retired after 41 years of federal government service. Besides Frank’s passion and talent for playing basketball—he was known for being an excellent guard and shooter—he also participated in other team sports, like softball and volleyball. Just like several of his brothers, Frank was also well known for his billiards and ping pong skills. Frank enjoyed watching and, when possible, attending college and professional sports, especially KU basketball and K-State football games. He also liked to watch his kids and grandkids participate in competitive sports—from baseball and basketball to swimming and soccer. Frank would often volunteer to help coach teams, support team clubs, or stage swim meets or tournaments. He also liked to attend concerts and other special school events with his wife, children and grandkids. Frank found great happiness in helping others in the community through his involvement in local organizations or church parish activities. In recent years, he helped organize and promote annual fundraising campaigns to support Sanctuary of Hope and was a volunteer at KU Medical Center, where he worked with cardiac and cancer patients. A cancer survivor himself, Frank also participated in cancer support groups. As a devoted parent who also developed long-time friendships through work, church and community activities, Frank relished the time he could spend with family and friends. Because many of his extended family members lived in the Kansas City area, he enjoyed being amongst his siblings and others who would gather for family events or celebrations throughout the year—regardless of reason or season. Frank’s strong work ethic, sense of purpose and willingness to help were traits that touched many and will be missed. Frank is preceded in death by his parents Jesus and Guadalupe; brothers Jesus, Sylvester, Joseph and Jesse, and sister Virginia Padilla. Frank is survived by his wife, Teresa Bustamante of the home; sons Frank P. Bustamante, Adrian (Lisa) Bustamante and son-in-law Terry Roblez; daughter Nicole Bustamante-Roblez; brothers Manuel (Sheila) Bustamante and Martin (Ofelia) Bustamante; sister Mercy (Nick) Sanchez and grandchildren Terry Jr., Jon, Kristina, Kennady, Katey and Chase. Due to COVID, there will be a private family mass and Christian burial on Monday, August 31, 2020. Frank will be laid to rest at Gate of Heaven Catholic Cemetery.

The family of Frank C. Bustamante created this Life Tributes page to make it easy to share your memories.

Send flowers to the Bustamante family.