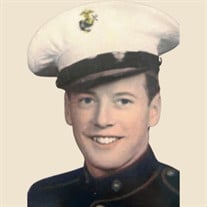 Frank William McGough 96, of Lenexa, Kansas, passed away on June 14, 2022. He was born in West Easton, PA on January 3, 1926. His parents, Charles and Irene (Carroll) McGough, his twin brother Carroll and sister-in-law Izzy McGough and his older sister Lavina Lauer preceded him in death. Frank is survived by his wife, Joyce (Long) McGough, Sunrise Assisted Living, Lenexa KS. They were married May 18, 1949, celebrating 73 years of marriage just last month. Frank served in the US Marine Corps and fought in WWII and the Korean War. He helped start a Marine Corps League detachment in Kansas City and was proud of his work with the group, and of one event in particular, Toys for Tots. Frank devoted many hours to collecting and delivering toys, as well as collecting food for Shawnee Community Services. Frank is a retired Letter Carrier and was a member of NARFE (National Association of Retired Federal Employees). He was instrumental in the startup of the Shawnee Mission Post Office Band, where he played trombone for many years. He was a member of St. Pius X Catholic Church in Mission, KS. In addition to his wife, Frank leaves nieces, nephews, great nieces and great-great nephews and was preceded in death by one nephew. A service will be held at Resurrection Catholic Cemetery, 8300 Quivira Road, Lenexa KS at 10am, Friday June 24. Due to health issues, it is unlikely Joyce will attend the service. Condolences may be sent to her in care of Sunrise of Lenexa, 15055 W 87th Street Pkwy, Lenexa, KS 66215. In lieu of flowers, the family suggest donations in Frank’s memory to either Toys for Tots (kansas-city-mo.toysfortots.org) or Shawnee Community Services (scsks.org).

Frank William McGough 96, of Lenexa, Kansas, passed away on June 14, 2022. He was born in West Easton, PA on January 3, 1926. His parents, Charles and Irene (Carroll) McGough, his twin brother Carroll and sister-in-law Izzy McGough and his... View Obituary & Service Information

The family of Frank W. McGough created this Life Tributes page to make it easy to share your memories.

Frank William McGough 96, of Lenexa, Kansas, passed away on June...

Send flowers to the McGough family.