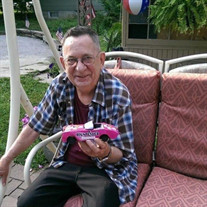 Freddie Sherman Hubbard, 83, of Kansas City, Missouri passed away Saturday, October 31, 2020. Freddie was born on September 26, 1937, in Eldorado Springs, Missouri, the son of Sherman and Beuna (Thompson) Hubbard. His first marriage blessed him with 2 children and 4 grandchildren. Freddie enjoyed his years working at Soil Service Garden Center. During this time he learned a lot about landscaping and worked hard at making his yard the best-looking yard on the block! After his retirement, he started doing odd jobs selling jewelry and later got into auto detailing. He was very particular in the way he detailed cars and took pride in “making those babies shine”. Freddie enjoyed traveling. While his children were young he took them on many trips, His daughter Tammy shares many great memories of the family vacations, and Freddie and his son Brent had lots of BMX adventures traveling together. His love of traveling had an influence on much of his life. He loved to collect marbles (not the shooting kind of marbles) and taught his kids and grandkids about the marble industry. He had some beautiful marbles and his love of marbles and love of traveling combined and he began going state to state selling them. After he slowed down selling and buying marbles, he continued taking trips with his sisters, daughter, grandson, and his very dear friend Marilyn. They all enjoyed casino hopping, where he enjoyed gambling and was definitely a risk-taker! His favorite place in the world was Lake Tahoe, a place he often reminisced to everyone about fondly. During his many travels, Freddie loved to find good restaurants and became what we called a "foodie." He loved food so much that if he found a favorite restaurant on one of his trips he would travel 200 miles just to go eat there again! He also enjoyed playing spades and pitch with family and taught his kids and grandkids how to be some of the best spade players. While he loved spades, pitch, and hearts, by far, his favorite card game was poker. He was an excellent poker player and this became a favorite pastime once he was no longer able to travel. Freddie was a complicated man and his relationship with his children and grandchildren reflected this, but he loved his family and would do anything he could to help them out although he might grumble about it quite a bit! Freddie was very loved despite his imperfections and will be deeply missed. Freddie is preceded in death by his parents; brother Kenneth Hubbard; sisters Claudine Enlow and Della Edgerton. He is survived by his son Brent (Jennifer) Hubbard; daughter Tammy Hubbard; sister Jackie Regan and grandchildren Justin Hubbard, Kristyl Hubbard, Kayla Hubbard, and Brenna Hubbard.

The family of Freddie Hubbard created this Life Tributes page to make it easy to share your memories.

Send flowers to the Hubbard family.