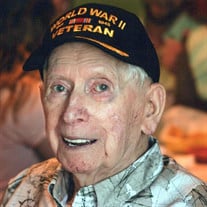 Harold E. Haag, 99, of Kansas City, Kansas, passed away on April 8, 2021, at AdventHealth of Shawnee Mission. Harold was born on July 11, 1921, in Kansas City, Kansas, the son of Harry J. Haag, Sr. and Ethel (Servos) Haag. Harold grew up and attended school in Argentine, Kansas. During the summer months, as a young boy, he worked in the fields around the area picking vegetables. In his teenage years, he had a route west of Argentine where he delivered the Kansan Newspaper. As a young man, he worked at Armourdale Auto Parts, and then The American Rock Crusher Co. mine, which was owned by the Tobin family. He sold his car to buy a dump truck named “Indiana” after he realized he was fond of heavy equipment. In 1940, he married Mabel E. Clark and started a family. On January 30, 1945, Harold was drafted into World War II and began his enlistment in the United States Army at Fort Leavenworth, Kansas. He departed for the Philippines on July 26, 1945, arriving 23 days later. As part of the Eighth United States Army, he would have been engaged in the invasion of Japan, however, after Japanese forces surrendered on September 2, 1945, he was responsible for peacefully occupying Japan. He made many friends along the way, including his fellow service members and Japanese interpreters. He separated from the United States Army on October 16, 1946, with an Honorable Discharge at the rank of Technical Sergeant. He received the Good Conduct Medal, the Asiatic Pacific Campaign Medal, the World War II Victory Medal, the Army of Occupation Medal, and the Philippine Liberation Ribbon. After arriving back stateside, Harold returned to Kansas City, Kansas where he continued working for the Tobin family at The American Rock Crusher Co. mine and raised his family. Since he sold his car to buy “Indiana” before the war, he had to walk 10 miles to work every day. He worked as a heavy equipment operator and eventually, owned a trucking service to haul rock - working there until the mine was closed and moved out to western Kansas City, Kansas where a new mine was opened. On the weekends he worked for the Tobins on their farm running farming equipment. He retired as a supervisor at the western Kansas City, Kansas mine in 1990. He spent the last 46 years with his wife, Gwen. They were avid square dancers in their middle years (Harold even earned his Bachelor’s of Square Dancing!) and regular bowlers. Harold won numerous bowling competitions over the years and bowled weekly until just last fall. One of the things they loved to do every week was dining at different restaurants to visit with their favorite owners and servers. They traveled regularly and enjoyed trips all over the United States, but especially to Las Vegas, Branson, and visiting dear friends in California. Harold is preceded in death by both of his parents; brother Harry Haag, Jr., sisters Juanita Novak and Eleanor Smallwood; a step-daughter Carla Smith; and a son-in-law Joe Bates. He is survived by his loving wife, Gwen Smith; son Harold “Jim” (Linda) Haag; daughters Mable “Sissy” Bates and Vicky (Tom) Reed; nine grandchildren, 17 great-grandchildren, and many great-great-grandchildren. A visitation will be held on Tuesday, April 13, 2021, from 10:00 - 11:00 A.M. at Maple Hill Funeral Home, followed by a funeral service starting at 11:00 A.M. In lieu of flowers, the family asks donations be made to Wounded Warriors, St. Jude's Children’s Hospital or the Ronald McDonald House Kansas City.

The family of Harold Haag created this Life Tributes page to make it easy to share your memories.

Send flowers to the Haag family.