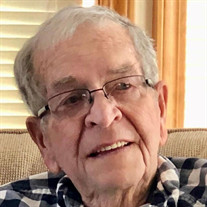 Harvey Lee Hite, 89, of Basehor, Kansas passed away March 6, 2022. Harvey was born on May 9, 1932, the son of Benjamin and Virginia Hite. Harvey is preceded in death by both of his parents, brothers Hansford and Stuart (Jan) Hite, and sister Betty Cook. He is survived by his wife of 64 years Sarah (Fagan) Hite; daughter Jeanne (Joe) Flanagan, and two sons Danny (Diane) Hite and Doug (Michelle) Hite; seven grandsons Joshua (Tracy), Jeff (Tiffany), and Jordan (Monique) Flanagan, Andy and Ryan Hite, and Tyler and Cameron Hite; seven great-grandchildren; one brother, Richard (Amy) Hite of Waynesboro, Virginia; and nieces and nephews. Harvey grew up in the Shenandoah Valley, where he held farm responsibilities while still in school. He later worked at Minute Maid, which brought him to Kansas City, where he met his wife, Sarah, and settled to start a family. He worked at and retired from the Proctor & Gamble lab, and built his family home on farmland outside Basehor. He enjoyed spending time playing catch, watching ball games, fishing, tending acreage on his lawnmower, and being active in church. He loved denim, plaid, Folgers coffee, porch swings, and simplicity. Most of the time he laughed at his own jokes. He knew how to repair just about anything with duct tape and bailing wire, and was the go-to when things needed fixing. Time with family was always a priority, and he never failed to be present. He gave his life to Christ, and knew the power of faith and redemption, which he shared and encouraged in family and friends. Second only to his relationship with God was his love of family, and no one in his care doubted his pride in family. They all know they were deeply loved, and his absence is felt tremendously. Services will be graveside, private family. A Celebration of Life is being planned for a later time. In lieu of flowers, the family suggests memorial donations to the following: Harvest Ridge Covenant Church 22015 Midland Drive Shawnee, KS 66226 Harvest Ridge Online Giving Link New Life Recovery LTD 4845 Shawnee Drive Kansas City, KS 66106

Harvey Lee Hite, 89, of Basehor, Kansas passed away March 6, 2022. Harvey was born on May 9, 1932, the son of Benjamin and Virginia Hite. Harvey is preceded in death by both of his parents, brothers Hansford and Stuart (Jan) Hite, and sister... View Obituary & Service Information

The family of Harvey Lee Hite created this Life Tributes page to make it easy to share your memories.

Send flowers to the Hite family.