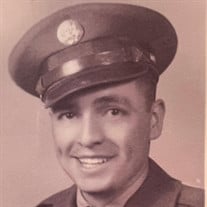 Henry O. Medina, 92, of Kansas City, Kansas passed away May 13, 2022 surrounded by his family. Henry was born on May 31, 1929, the son of Conrado and Esperanza (Oropeza) Medina. He is preceded in death by his son Tommy L Medina; both his parents; 2 brothers and 4 sisters. He is survived by his wife of 67 years Gloria Medina; 2 sons Henry K. Medina and Michael ( Andrea) Medina; 2 daughters Donna (Louie) Gonzalez and Michelle Medina; (12) grandchildren; ( 8 ) great grandchildren; (1) great great grandchildren and sister Celia. Henry was born and raised in the Argentine district of Kansas City Kansas. He married Gloria Reyes in 1953 and moved to Missouri. They lived in an apartment on Independence Avenue until moving into a house on 40th and Wayne for several years. The location of the house is now a neighborhood park which includes a golf course known as Harris Park. Henry and Gloria moved back to the Argentine area in 1986. Henry and Gloria raised their five children with a Catholic foundation filled with love, discipline, respect and the importance of family. Henry and Gloria’s household always included animals( dogs, cats, birds etc) which were always treated as family. Henry would take the family to state fairs, zoos, amusement parks and drive in theatres. Henry would always joke around with family members and had an appreciation for the younger family members. He continued this when he became a grandfather. Henry was known for always having something for the kids, a football, a book, some kind of toy or gift to make the kids smile. His work career began at a very early age due to his father’s death. Henry served in the Army branch of the military. Some of Henry’s places of employment include Dave Vegas Texaco, Railway Icehouse, GM&O/ICG railroad and Packaging Corporation of America. Henry received numerous awards for perfect attendance and safety. For several years, Henry worked two full time jobs as a diesel truck driver during the day and a car man for the railroad at night. After Henry retired in 1985, he started to be a vendor at local drive-ins in the Kansas City area. He was most noted for his blue conversion van and up to 10 tables set up with various items from jeans, jerseys,sports memorabilia, toys, hats and bottled water. He had a reserved spot and a group of loyal customers at Nate’s 63rd st swap and shop. Henry continued to be a vendor up to 2017. After his days as a vendor passed, he still was always notorious to have a pop up yard sale. Henry was a hard working person and he was a very humble man. He never met a stranger as he had a number of friends that he would talk with often. Henry enjoyed a variety of foods which included tacos, hamburgers, pizza, ribs and Quick Trip hot dogs. One of his favorite restaurants was Rosedale BBQ where he would enjoy ribs, fries and an RC cola. Henry had a sweet tooth and would often have a box of Nilla wafers and a glass of milk nearby. Henry did not cook often but his signature dish was hamburgers which were juicy and tasty. Henry was a handy mechanic and would often do work on his own cars and other family members as well. Henry had a number of vehicles in his lifetime; he was the driver for a wood panel station wagon packed with kids and a large blue conversion van with family members on the way to a San Antonio, Texas trip twice a year! Henry had a love for sports and was loyal to his local teams of the Royals, Chiefs and his beloved KU Jayhawks. Henry followed the latest tournament and was grinning when the Jayhawks were crowned champions. Henry will be missed by many but his spirit of love, laughter, support and wisdom will be fond memories and live in our hearts. Henry led by example and was a soft spoken gentleman. He loved the lord and never backed down from difficult situations that life presented him. Henry has earned his wings and somewhere in heaven he is serving God. Rest in peace Henry. You served well in your journey on Earth. We love you and will greatly miss you! A Special gratitude of thanks to Louie (son in law) for all help and care you gave to our dad! He loved you like a son! There will be a visitation Wednesday, May 25 from 9:30 - 11AM with a Funeral Mass starting at 11AM all at Sacred Heart Catholic Church. Burial will follow at Maple Hill Cemetery.

Henry O. Medina, 92, of Kansas City, Kansas passed away May 13, 2022 surrounded by his family. Henry was born on May 31, 1929, the son of Conrado and Esperanza (Oropeza) Medina. He is preceded in death by his son Tommy L Medina; both his parents;... View Obituary & Service Information

The family of Henry O. Medina created this Life Tributes page to make it easy to share your memories.

Send flowers to the Medina family.