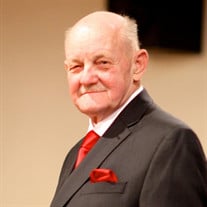 Herman Hans Holtorf, 79, of Shawnee, Kansas passed away Sunday, February 20, 2022 surrounded by family at AdventHealth Shawnee Mission. Herman was born April 22, 1942 in Central City, Nebraska, the son of Hans and Myrtle Holtorf. On Tuesday, February 14, 1967 at St. Mark's in Queens, NY, he was married to the love of his life, Wanda. He proudly served his country in the United States Army Reserves. Herman graduated from the University of Nebraska with a Bachelor’s degree. He then worked for Beaver Valley Canning as an Accountant and eventually was promoted to General Manager. After working for the company for twenty years he and his wife decided to become business owners. Together they owned multiple video stores and operated H&W Convenience, Gas & Retail Liquor Store. He was a devout Christian with a strong faith and was active in St. Luke’s Episcopal Church as a member of the vestry, greeter, and landscape care teams. He was passionate about providing for and loving his family, including his Beagles. He enjoyed spending time outdoors whether that be on the golf course, with his dogs, gardening, or just simply enjoying nature. Most importantly he was a great husband, father, and grandfather and will be dearly missed. He is survived by a son, David Holtorf and wife Ammie of Oak Grove, MO; three daughters, Renee Tinaglia and husband Joe of Bradenton, FL, Patricia Holtorf of Ankeny, IA, and Teresa Loving and husband Eric of Shawnee, KS; nine grandchildren, Allison, Andrew, Alexandra, Madeline, Veronica, Austin, Brendan, Annika, Natalie; three great grandchildren, Ella, Olivia, and Colton; five sisters, Christine Huber, Marilyn Kyes, Arlene McGuy, Elsa Kaiser, and Margaret Lange; and his two Beagles, Lola and Winston. He is preceded in death by his parents and his wife of 52 years, Wanda Holtorf. The family will receive friends from 9:00-10:00 AM with a Celebration of Life beginning at 10:00 AM Friday, February 25, 2022 at Maple Hill Funeral Home. Burial will follow at the Maple Hill Cemetery. A reception will be held after burial at the American Legion Post 370 (7500 W 75th St, Shawnee Mission, KS 66204).

The family of Herman Hans Holtorf created this Life Tributes page to make it easy to share your memories.

Send flowers to the Holtorf family.