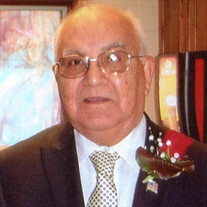 Isidro V. Salas, age 91, went to be with the Lord on Saturday, September 25, 2021. He was born on January 21, 1930, in Kansas City, Kansas. At a young age, Isidro began to work as a paper boy. From the age of 13 to 15, he began working at Frank Creeten Farm. He then went on to work at Faultless Laundry from the age of 15 to 18. He started his career with the Union Pacific Railroad at the age of 18. He then served in the army as a corporal in New Ulm Germany, from 1951 to 1953. When he returned from the army he continued on with his career at the railroad. He was employed there for 36 years. Isidro married Mary Fajardo in 1954. They were married for 57 years, until her death in 2012. Together, they raised three children. Isidro enjoyed fishing with his brother-in-law Cruz Flores, bowling and working with his hands. He spent countless days working on projects with another brother-in-law, Ben Castilleja, Sara Castilleja and our mother at their church, First Baptist Church Westside. He also enjoyed helping out his neighbors with various tasks. No job was too big for him. He and Mary traveled to many different places with Ben and Sarah Castilleja. Their most favorite place to go was Branson, Missouri. He loved playing with his grand children, always coming up with a variety of ways to entertain them. And then, along came his great grandchildren. The joy and love he had for them was such a wonderful thing to see. Isidro was preceded in death by his loving wife, Mary (Fajardo) Salas; parents-Jesus Ponce Salas and Carmen (Vasquez) Salas; sister Elsie Carrillo, Esther Dias; brother Jessie Salas Jr. Survivors include, daughter Pamela Salas, Tillie (Salas) Steffen (Joe); son David Salas; Grand children Heather Olson, T.J. Olson, Travis Olson (Kacie). Great grand children; Tyler Olson, Kali Olson, Tommy Olson. Brothers; Frank (Lou) Salas, Tony (Pat) Salas. Sisters: Nina Hinojos (Tommy), Margret Long, Carmen Oropeza, Concha Salas. Isidro will be remembered as an honorable man, for his sense of humor, his devotion to the Lord and family and friends. He will be missed by all. Until we meet again. Thank you Isidro for your great example.

The family of Isidro V. Salas created this Life Tributes page to make it easy to share your memories.

Send flowers to the Salas family.