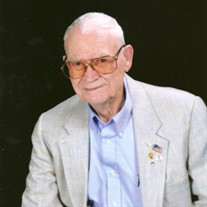 J.C. Dame, 95, of Olathe, KS had his heavenly discharge Monday, November 23, 2020 at Shawnee PARC in Overland Park, KS. J.C. was born June 7, 1925 in Pocahontas, AR, the son of Ed and Nancy Dame. On September 21, 1946 he was united in marriage to Christene in Walnut Ridge, AR. After Christene’s passing he married Betty Jackson. He proudly served his county in the United States Marine Corps during World War II and then joined the US Army Reserve where he served over twenty years with a final rank of SFC. He worked for the Frisco & Burlington Railroad company as a conductor for thirty four years until retiring as a switchman. He was a Grand Master of the his Masonic Lodge, member of the Scottish Rite Adballah Shriners, the American Legion, VFW, and Eastern Star Tirzah #85. Most importantly he was a loving husband, father, grandfather, and great grandfather and will be dearly missed. He is preceded in death by his first wife, Christene; second wife, Betty; his parents, Ed and Nancy; and four siblings, Dave Dame, Thelma Hawkins, Velma Matthews, and Lenora Rose. He is survived by two children, Donna Massey and husband David of Lenexa, KS and James Dame and wife Mary Anne of Portland, OR; brother, Clyde Dame; 4 grandchildren, 7 great grandchildren, nieces, nephews, and many great friends. Due to restrictions, the family will hold private funeral services which will be streamed live beginning at 1:00 P.M. on the Maple Hill Facebook page (facebook.com/maplehillfuneralhome). All are invited to a graveside service with military honors beginning at 2:00 P.M. Friday December 4, 2020.

The family of J.C. Dame created this Life Tributes page to make it easy to share your memories.

Send flowers to the Dame family.