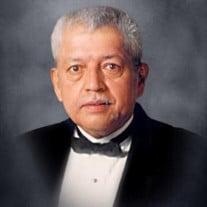 Jesse Raul Ibarra, Sr., 85, of Kansas City, KS passed away on Tuesday, December 29, 2020. Jesse retired from Hyatt Hotels as a beverage manager; he also worked many years in the retail grocery store, Milgrams, as did many members of his family. He had a strong work ethic and he instilled that in his children. He was a devout catholic and was a member of St. Thomas Catholic Church while he lived in Armourdale; then he became a member of St. John the Evangelist Catholic Church when he and his family moved to the Argentine area. You would also find him and his wife attending Sunday mass at Redemptorist Parish in Kansas City, Mo. His devotion was his family and he enjoyed family gatherings and cookouts. He enjoyed watching sports, especially the Kansas City Royals and the Kansas City Chiefs. Jesse and Margie shared the same birthday, June 18, and on many years, that day fell on Father’s Day, which became a special celebration. Jesse was also close to his wife’s family, the Castro familia, who he helped on many occasion with his support of caretaking of his in-laws. Jesse served in the National Guard for 9 years as Sergeant 1st Class. He was lifted up by God’s angels to join his son, Gary A. Ibarra, his parents, Richard and Carmen Ibarra, and his brothers, Raymond Ibarra and Dr. Richard Ibarra, Sr. He is survived by his wife of 65 years, Margarita (Margie) Ibarra of Kansas City, KS. His sons, Joseph P. Ibarra (Diana) and Jesse R. Ibarra, Jr. (Michelle) both of Kansas City, Kansas, and his daughter, Laurie M. Ortiz (Joe) of Kansas City, MO. Grandchildren, Jesse R. Ibarra, III, Nicholas J. Ibarra, Alyssa M. Ibarra, and Jessica L. Ibarra. Great-grandchildren, Adrian Ibarra-Penca and Jalen C. Mora. Siblings: RoseMary Montemore (Genaro dec.), AnnaMarie Gonzalez (Paul dec.), Mary Garcia (Tony), and Carmen Wolfgeher (Ralph); and many nieces, nephews, and godchildren.

Jesse Raul Ibarra, Sr., 85, of Kansas City, KS passed away on Tuesday, December 29, 2020. Jesse retired from Hyatt Hotels as a beverage manager; he also worked many years in the retail grocery store, Milgrams, as did many members of his family.... View Obituary & Service Information

The family of Jesse R. Ibarra Sr. created this Life Tributes page to make it easy to share your memories.

Send flowers to the Ibarra family.