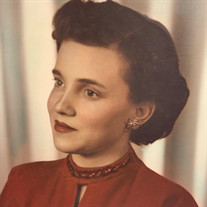 Joann Wisdom, 88, of Kansas City, Kansas, passed away July 29, 2019 at Brookdale Rosehill Nursing home surrounded by her family. Joann Wisdom was born January 26, 1931 in Oklahoma City. Her life was defined by achievements through adversity. During the Great Depression, she travelled with her family from Oklahoma to California and back as her parents desperately sought work. She contracted smallpox as an infant and lost her sight, which led her to enter the Oklahoma School for the Blind at age 7. Despite homesickness, she became an accomplished student, and won 3 Blue Ribbons at the Oklahoma State Fair for her crochet work. At age 14, Joann was fortunate to have surgery restore sight to her right eye. The very next day after the procedure, a tornado leveled her school and dormitory. Joann survived and was credited with helping to find other survivors. Afterwards, Joann returned to southeast Oklahoma and began public school. She was voted class president, was a cheerleader for 3 years, won 3 state competitions in Oklahoma History, Math, and Speech, and graduated valedictorian. She earned a cosmetology license at the end of her junior year. She got her first beautician job in Tulsa at the age of 18. Soon after, she met a young man from Colgate named Bill Wisdom, whom she married on July 30, 1951 in Fort Smith, Arkansas. Not long after, they moved to Kansas City, where they would both begin careers over three decades long – Bill with General Motors, and Joann as a hair salon owner. Her professional accomplishments include: President of the WY-JO Cosmetology Association; Chairman of Fundraising for the Southside Business and Professional Women; State Board of Cosmetology for 12 years, including 2 as chairman; member of the Wyandotte County Democratic Club, first as a precinct woman and later as Vice President. Joann was also an integral part of her husband’s political success. Using her organizational skills, together they orchestrated 10 winning campaigns for the Kansas Legislature, 9 to the House and 1 to the Senate. She was equally dedicated to Rosedale Congregational Church and her community, serving for many years as a Sunday school teacher and deaconess. Her faith inspired her to support the Cross-Lines Community Outreach Center, and served many years on the Center’s board. Joann’s most selfless devotion was to her family. She was a loving wife, caring mother, and adoring grandmother. She will be remembered with love, admiration, and joy. She was preceded in death by her husband, parents, 3 beloved brothers, and a precious sister. Surviving are her daughter, son, 3 grandchildren, one brother, nieces, nephews, cousins, brother-in-law, and sisters-in-law. A visitation will be held from 9:00 - 11:00 A.M. with services beginning at 11:00 A.M. Saturday, August 10, 2019 at Maple Hill Funeral Home. It would be Joann’s wish for donations to be made to Cross-Lines (736 Shawnee Ave., KCK, 66105) and the Kansas School for the Blind (1100 State Ave., KCK, 66102).

The family of Joann Wisdom created this Life Tributes page to make it easy to share your memories.

Send flowers to the Wisdom family.