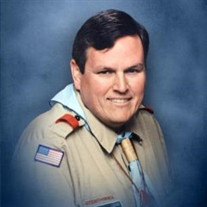 John D. Bouck, Jr., 72 of Overland Park, KS, passed away Wednesday, December 18, 2019 in the presence of his wife. He was born May 18, 1947 in East Lansing, Michigan, the son of John Sr. and Carol Bouck who had met years earlier while students at Michigan State University. John met his future wife Mary in Kansas City while he was completing his BA in History from the University of Missouri in Kansas City and she was completing her BSN at the University of Kansas. They were united in marriage on August 10, 1969 at Old Mission United Methodist Church in Fairway, KS. They welcomed their son Christopher into the world in 1976. John was a fascinating man with intellectual curiosity and profoundly broad interests spanning millennia and the globe. He was a lifelong history buff, born 200 years too late to have walked among his heroes of the Revolutionary War. He had a deep sense of civic pride, love for his family, and love for his country. He was a Boy Scout leader, Deputy Director of the National Records Center for the Social Security Administration, member of the Sons of the American Revolution, and a member of the United Methodist Church of the Resurrection. He travelled to dozens of countries with his wife and son. Someone once said of him, “he doesn’t say much, but what he does say is really worth saying.” He had a mischievous, dry sense of humor. He enriched the lives of many and will be dearly missed. He is preceded in death by his parents. He is survived by his wife Mary Louise Bouck of the home; a son Christopher John Bouck and wife Daniela of Grand Cayman, Cayman Islands; two grandchildren, Victoria Louise Bouck and Charlotte Ilse Bouck; a brother Jim Bouck; and a sister Jaynie Bouck. A Celebration of Life will be held on Friday, December 27, 2019 with a visitation beginning at 3:00 P.M. and service beginning at 3:30 P.M at Maple Hill Funeral Home. In lieu of flowers, memorial contributions are suggested to Pets for Life, The American Cancer Society, or the American Diabetes Association. A private family inurnment will take place at a later date.

John D. Bouck, Jr., 72 of Overland Park, KS, passed away Wednesday, December 18, 2019 in the presence of his wife. He was born May 18, 1947 in East Lansing, Michigan, the son of John Sr. and Carol Bouck who had met years earlier while students... View Obituary & Service Information

The family of John D. Bouck Jr. created this Life Tributes page to make it easy to share your memories.

Send flowers to the Bouck family.