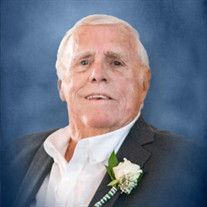 John “JJ” Miller, 86, passed away at his home Wednesday, August 18, 2021. Johnnie Joe was born on September 4, 1934, the son of Albert and Agnes Miller. JJ graduated from St. Joseph High School in 1952. After graduation he joined the US Navy and proudly served during the Korean War at just seventeen years old. He was an aviator mechanic on the USS Lake Champlain, or as he called it, “Lake Damn-Shame.” He was honorably discharged in 1955 after serving, “3 years, 21 days, 4 hours, and 15 minutes.” After his discharge he attended and graduated from Donnelly College. JJ was a natural-born salesman and spread his talents in a few jobs before owning and operating Miller Retail Liquor Store, which became the largest retail liquor store in Kansas. JJ was passionate in advocating for the liquor industry in Kansas. He opened JJ’s Party Center next to his store - much to the consternation of the ABC agents in Kansas – allowing him to advertise and market the party center on such things as matchbooks that read, “Kansas Liquor Laws Suck.” He was past President and District Director of the Eastern Kansas Retail Liquor Dealers Association. He was a lobbyist for the Kansas liquor industry and was instrumental in getting Liquor by the Drink legislation passed in 1986, opening doors for the hotel and hospitality industries to flourish in Kansas, and allowing the everyday person to enjoy a cocktail without purchasing a private club card to each establishment. Cheers! JJ was a great Shawnee advocate. He was a 55-year member of the Shawnee Knights of Columbus, and also a past Grand Knight. He was also a member of the American Legion, Shawnee, for 55 years. He was passionate in promoting the City of Shawnee. With a little help from his friends, began the annual St. Patrick’s Day Parade in 1981, a tradition which continues today. He proudly led the parade each year behind a banner that read, “We’re the Idiots Who Started this Mess.” He also began the Great Shawnee Duck Race to fund the City’s Sister City Program with Erfurt, Germany; Listowel, Ireland; and Pittem, Belgium. John was a lifelong member of St. Joseph Catholic Church in Shawnee. He was an establishment at 10:30 mass as an usher for over 60 years. He never met a stranger and loved to interact with everyone, especially the kids, joking with them – and never quietly. We’re not sure he ever knew how to whisper. He was a true believer in the benefits of Catholic education, sending all five of his children through St. Joseph Grade School and St. Joseph High School/Aquinas. On May 28, 1960 he “outkicked his coverage” when he married his bride of 61 years, Barbara Rottinghaus, a farm girl from Horton, Kansas turned registered nurse. In his words he, “joined the extremely beautiful Barbara Rottinghaus in raising five equally beautiful children.” He was always the favorite grandpa to his ten grandchildren and two step-grandchildren. Babies and children were the light of his life, and he felt so fortunate to be around long enough to tease and play with his next generation of great-grandchildren. They will miss his larger-than-life presence and fun-loving nature. JJ’s charismatic personality and clever wit was the perfect blend of warmth and humor. He was one of a kind. With his booming voice, sense of humor, and love of people, he never went unnoticed. He was “JJ from Shawnee.” He taught us to count our blessings, see beauty in everything, and how to be happy and grateful. His big personality leaves behind an even bigger void in our hearts. But JJ wouldn’t want our sadness, he’d want us to celebrate the great life he lived. “I love you more now than I ever did.” JJ is preceded in death by a son, Greg Miller; parents Albert and Agnes Miller; brothers and their spouses, Albert and B Miller, Bubba Miller, Tommy and Barbara Miller, Bobby Miller and Danny Miller; niece Terri Miller and nephew Tom Burns. He is survived by his wife Barbara Miller; four children and their spouses Denise Keating (Dan), JJ Miller II (Monica), Lisa Mahoney (Colin) and Laurie Long (Ray); siblings and their spouses Carol (Bob) Burns of Evergreen, CO, Kathy (Mark) Gandy of Shawnee, KS, Aggie (Alan) Willoughby of Shawnee, KS; sister in law Margie Miller; and numerous other extended family members.

The family of John (JJ) Miller created this Life Tributes page to make it easy to share your memories.

Send flowers to the Miller family.