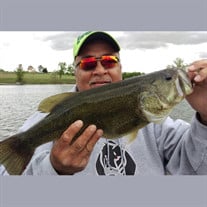 Joseph Anthony Pacheco (58) of Kansas City, KS passed away January 28, 2020 surrounded by his family. Joe was born at St. Mary’s Hospital of Kansas City, MO to Merced and Elvira (Campos) Pacheco and raised in Kansas City, KS. Growing up, Joe was a talented baseball player and continued to enjoy sports throughout his life, attending many KC Royals games and playing on recreational softball teams. Joe was an avid Raiders fan, attending several games when the team came to town. He was very excited about their move to Las Vegas and looked forward to visiting the new stadium. Joe had many hobbies including cars, BBQ, fishing, and tinkering around the house and his garage. Joe was a great handyman and was always the first person that family and friends would call when they needed help. Joe never met a stranger and could talk for hours about anything or nothing at all. Joe graduated from JC Harmon High School in 1979. In 1983, his daughter Lacey Nichole was born to Suzanne (Wilson) Pacheco and quickly became his primary purpose for living. While they did not remain married, Joe and Suzanne continued to co-parent Lacey and remained good friends. On February 6, 1993 he married Jennifer Cochran and they enjoyed 27 years of Mr. Right and Mrs. Always Right. Joe is preceded in death by his parents Merced and Elvira Pacheco and brother Merced Pacheco, Jr. He is survived by his wife Jennifer of the home, his daughter Lacey Pacheco (Andrew Chapman) of KCMO, his grandson, Jude Fox of KCMO, sisters Theresa (and James) Holt of Jasper AR, Maria “Lupe” Pacheco of KCKS, Monica (and David) Learned of Shawnee KS, sister-in-law, Cathy Pacheco of KCKS, 7 nieces and nephews, 14 great nieces and nephews, and 6 Godchildren. Services will be held at St. John the Evangelist Catholic Church located at 2910 Strong Ave, Kansas City, KS 66106, Saturday, Feb 22, 2020. Visitation/Rosary 12 to 2pm Funeral Mass at 2pm. In lieu of flowers, the family asks that those wishing to send their support instead make a donation to the Jude’s college fund. You can reach out to the family for more information.

The family of Joseph Anthony Pacheco created this Life Tributes page to make it easy to share your memories.

Send flowers to the Pacheco family.