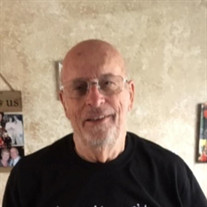 The family and many friends of Landon Wayne Quigley, of Shawnee, Ks, known as Lanny to family and lifelong friends, are deeply saddened by his passing at Hospice House in Olathe, Ks on July 8, 2021 at the age of 83. He is predeceased by his mother, Ruth Quigley and nine brothers and sisters; James, Eunice, Jean, Avalene, Marvel, Art, Bill, Guy and Milan. Landon and his loving wife Doris of 62 years were married in Hiawatha, Ks on June 27, 1959. He is lovingly remembered by his children Lanna, Jackie and Landon, Jr., grandchildren Lorelei, Nathan, Jackie Rose, Michael, Hannah and Holly and seventeen great-grandchildren. Landon was born on his grandfather’s farm in Barada, Ne, on October 28, 1937. He graduated from Shubert High School and served in the US Air Force from 1959 to 1963, worked as a computer systems technician for 30 years with Control Data Corporation and worked as a postal carrier for 5 years before retiring in 1996. Landon enjoyed sports, lettering in baseball, basketball and football in high school, and continuing to play softball and basketball with church leagues well into middle age. He enjoyed watching the Royals and Chiefs when he could, but very rarely missed a Nebraska game if televised. Kids in the family often wondered if he realized that the Huskers’ coach and players could not hear his advice and admonishments through the tv. Throughout his life, the church was where he seemed to be at his best. With a true servant’s heart, he served as a trustee, deacon, and greeter, and many souls found a church home as a result of his calling during the week on the previous Sunday’s visitors. While not a particularly extroverted personality, he loved to be among his church family as well as being surrounded by his devoted descendants. The visitation will be held at Olathe Christian Church, 1115 S. Ridgeview Road Olathe, Kansas 66062 on Thursday, July 15 from 6:00-8:00pm. In lieu of flowers, memorial donations may be made to Safe Home, Mission South Side, Olathe Health Hospice House or Olathe Health Cancer Center. Condolences for the family may be offered online at https://www.caringbridge.org/visit/landonquigley/journal

The family and many friends of Landon Wayne Quigley, of Shawnee, Ks, known as Lanny to family and lifelong friends, are deeply saddened by his passing at Hospice House in Olathe, Ks on July 8, 2021 at the age of 83. He is predeceased by his... View Obituary & Service Information

The family of Landon Wayne Quigley Sr. created this Life Tributes page to make it easy to share your memories.

The family and many friends of Landon Wayne Quigley, of Shawnee,...

Send flowers to the Quigley family.