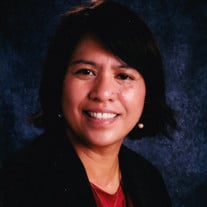 Laurie Ann Hoffman, 58, of Merriam, KS passed away in her sleep while under palliative care at The University of Kansas Medical Center on September 8, 2019. Laurie was born in Wailua, Hawaii on December 20, 1960 to Allen and Rose Sniffen. She was the second of nine children and the eldest girl. When she was 17, she traded the sunshine and balmy temperatures of Hawaii for snow and a scholarship to Drake University in Des Moines, Iowa. After graduating, she went to work at Target Stores and met the love of her life, Jim. They married in August 1983. Jennifer was born before they moved to the Kansas City area in 1985. Laurie busied herself with Bible studies, watching children in the church nurseries and being a fantastic mother and wife. In 1989, Michael was born and Laurie turned 29 (an age she never relinquished for the remainder of her life). Over the next decade, she worked in the church nurseries, became the nursery director and had three more children--Joshua, Matthew, and Jamie. As her children grew, Laurie taught science for a homeschool co-op and took a job at Merriam Park Elementary as an educational aide helping teach Reading and Math. After several years, she moved up to working at Horizons High School where she was the librarian, ran the coffee shop, and helped with the work/study program. Laurie loved working with children of all ages, opening her presents early, bringing chocolates to everyone at the cancer center, and giving “mom advice” to all of the students. She is survived by her husband, five children, eight siblings, and many nieces and nephews. A visitation will be held from 9am -10am with a memorial service immediately following at Cross Points Church (6824 Lackman Road, Shawnee, KS 66217) In lieu of flowers, a memorial gift can be sent to: World Indigenous Missions Attn. #163 P.O. Box 310627 New Braunfels, TX 78131-0627

Laurie Ann Hoffman, 58, of Merriam, KS passed away in her sleep while under palliative care at The University of Kansas Medical Center on September 8, 2019. Laurie was born in Wailua, Hawaii on December 20, 1960 to Allen and Rose Sniffen. She... View Obituary & Service Information

The family of Laurie Ann Hoffman created this Life Tributes page to make it easy to share your memories.

Laurie Ann Hoffman, 58, of Merriam, KS passed away in her sleep...

Send flowers to the Hoffman family.