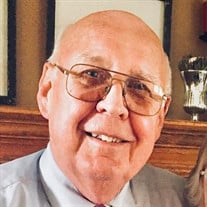 Lavon Lee Lawler was born March 15, 1943 in Wright County, Missouri to Lester and Clyda Harlamert Lawler. The Lord called him home on the 10th day of January, 2020 at the age of 76 years, nine months, and 25 days. Lavon grew up on the family farm near Hartville, Missouri and graduated from Hartville High School in 1961. On December 24, 1961 he married his high school sweetheart, Joan Davis. In May 1963, Lavon and Joan moved to Kansas City, Kansas where they made their home and raised their family. Lavon was saved and baptized as a young man, and in 1971 he announced his call to the ministry. He preached the gospel in several churches as a pastor, interim pastor, or evangelist. At the time of his death he attended Glad Tidings Assembly of God. Lavon also worked in manufacturing and retail to provide for his family, and he was a handyman who could “fix about anything.” Lavon loved his family and was a rock for them and his friends. He was a caring neighbor and will be missed by all who knew and loved him. He was predeceased by his parents and two brothers, James Lawler and Ray Lawler. He is survived by his loving wife of 58 years, Joan; two children, Roger Lawler and his wife, Lesli, of Olathe, Kansas and Rosanne Lawler of Fairway, Kansas; four granddaughters, Paris, Olivia, Abigail, and Alexandra; one brother, Kenneth Lawler of Mountain Grove, Missouri; three sisters, Yvonne Wiggins of Dillon, Montana, Delores Spencer of Grovespring, Missouri, and Sandra Mack of Bluffton, South Carolina; several nieces and nephews and cousins and many friends. We will all greatly miss him, but those of us who personally know the Jesus he preached about will see him again. Visitation will be held on Wednesday, January 15, from 5-7PM with a funeral service on Thursday, January16 at 11AM at Maple Hill Funeral Home and Burial to follow at Maple Hill Cemetery. In Lieu of flowers the family has requested memorial contributions to be made to City Union Mission 1108 E 10th St, Kansas City, MO 64106

Lavon Lee Lawler was born March 15, 1943 in Wright County, Missouri to Lester and Clyda Harlamert Lawler. The Lord called him home on the 10th day of January, 2020 at the age of 76 years, nine months, and 25 days. Lavon grew up on the family... View Obituary & Service Information

The family of Lavon Lee Lawler created this Life Tributes page to make it easy to share your memories.

Send flowers to the Lawler family.