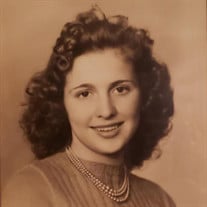 Leontine Lillian Robertson, 97, of Kansas City, KS, passed away Tuesday, October 13, 2020, at her home. Lee was born June 9, 1923 in Ironton, Ohio the only child of Elsie and Edward Secrest. Lee graduated from Ironton High School in 1941 where she was the homecoming queen her senior year. She continued her education at the Christ Hospital School of Nursing where she graduated in 1944. After graduation she joined the Navy Nurse Corp where she proudly served her country and met the love of her life, Edward N. Robertson. Her and Edward were united in marriage on September 8, 1945 in Oceanside, California. After her service in the military she worked eight years at Dr. G.P. & E.G. Neighbor’s offices. She was the head nurse in Obstetrics at St. Margaret’s Hospital from 1958-1975. She then worked from 1975-1988 at St. Mary’s Hospital. The two hospitals closed and Lee decided to change careers. She worked at Teri’s Cookie Bouquet for ten years and then at Hyvee from 2001-2014 where she retired. Throughout her life Lee remained active in community involvement. She was a member of AARP, American Legion Post 111, South Turner Neighborhood Association, and was a judge clerk for the Wyandotte County Election Board. Lee loved sports and was an avid Chiefs, Royals, and Kansas Jayhawks fan. Most importantly she loved her family and will be deeply missed. She is preceded in death by her parents; daughter Donna Mounkes; and husband Edward. She is survived by three children, Teri Damanti of Gladstone, MO, Barb O’Brien of Lenexa, KS, and Carol Johnson of Merriam, KS; thirteen grandchildren; and thirteen great grandchildren. A visitation will be held from 6:00 - 8:00 P.M. Monday, October 19, 2020 at Maple Hill Funeral Home. A graveside service will be held at 1:00 P.M. Tuesday, October 20, 2020 at the Maple Hill Cemetery. Memorial donations may be made to the Humane Society of Greater Kansas City.

Leontine Lillian Robertson, 97, of Kansas City, KS, passed away Tuesday, October 13, 2020, at her home. Lee was born June 9, 1923 in Ironton, Ohio the only child of Elsie and Edward Secrest. Lee graduated from Ironton High School in 1941 where... View Obituary & Service Information

The family of Leontine Lillian Robertson created this Life Tributes page to make it easy to share your memories.

Send flowers to the Robertson family.