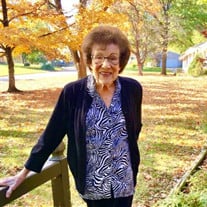 Norma Moore Surrounded by her family who loved her dearly, Norma Moore, 96 years young, passed on to Heaven on Saturday, August 8, 2020 after living a full and beautiful life that was a reflection of her faith and love in Jesus Christ. Norma was born in Kansas City, Missouri on Christmas Day 1923. She lived her life in the Kansas City area, attended Argentine High School and Junior College of Kansas City. Growing up she rode horses, played the bass violin and loved riding with her brother on his motorcycle. Extremely smart and always ready to take on a challenge, Norma learned to fly both the Aeronca (high wing) and Waco (bi-plane) when she was just 19 years old, stepping outside the box of what women traditionally did in that era. At the same time, while in junior college and with WWII ramping up, IBM recruited her to be trained on the new Electrical Accounting Machine (EAM) , better known today as a computer. Twice she was sent to the Pentagon for extensive training with the man who later became the president of IBM. She worked in the Quartermaster Depot during the War and the work they did on the EAM organized the vast amount of supplies that were put on troop trains coming through Union Station. After the war she continued to work in the field and at one time was considered the top woman EAM operator in Kansas City. On October 25, 1947, she married the love of her life, Larry Moore, and they remained devoted to each other for the next 70 years. When they started a family, Norma put her creative energy and enthusiasm into being a wife, mother and grandmother extraordinaire. She made everything fun and funny with her quick wit and endless puns! She was an amazing seamstress, phenomenal cook (notorious food pusher – “have some more”) and was famous for decades for her many taco parties! She loved to garden and she was an original sports fan following the Chiefs from one Super Bowl victory… to the next (never doubting). But her real love was for Kansas basketball and she watched with devotion, knew the players and never missed a game. Of her many qualities, it was her generosity and loving spirit that embraced everyone who met her or came to her home that set her apart. She listened with her heart and she remembered everything. More than anything, Norma (Mom, Nan) loved her family. Her husband, children, grandchildren, and all those who were family to her, were the most important part of her life by far. She was the “heartbeat” of the family that drew everyone home. Her selflessness, kind heart, her incredible positive attitude and perseverance in the face of any challenge, her rock-solid faith in God and unquenchable zest for life and learning something new inspired all those around her. Her life exemplified what love is all about, and that is stamped on the hearts of everyone who knew her. Norma is survived by her son Kris (wife Tiffany), daughter Shelly Guinn (husband Keith); grandchildren Kristin, Katie, Ally, Connor, Jessa, Alexander and Grace; extended family Kent Guinn and Sarah Guinn. Memorial contributions can be made to City Union Mission, www.cityunionmission.org

Norma Moore Surrounded by her family who loved her dearly, Norma Moore, 96 years young, passed on to Heaven on Saturday, August 8, 2020 after living a full and beautiful life that was a reflection of her faith and love in Jesus Christ. Norma... View Obituary & Service Information

The family of Norma M. Moore created this Life Tributes page to make it easy to share your memories.

Surrounded by her family who loved her dearly, Norma...

Send flowers to the Moore family.