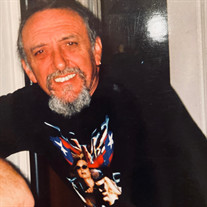 It is with great sadness that we announce the peaceful passing of Paul Francis Cregan of Overland Park, KS on Saturday, November 30, 2019 at the age of 69. Paul was born June 25, 1950 in Edinburgh, Scotland to Francis and Mary Cregan. He is preceded in death by his parents and his four siblings, Angela, Laura, Sandra and Jeffrey. Paul settled in Kansas in 1966 and went to work for BNSF Railroad in 1968. He took a leave of absence from BNSF and enlisted in the United States Navy in 1969. He and his wife Patty were married later that year. He eventually returned to Kansas and BNSF Railroad where he worked until retiring in 2011. Paul is survived by his wife of 50 years, Patty, his daughters Stacey (John) Klein of Shawnee, KS, Lisa (Chad) Lippelgoos of Leawood, KS and Jennifer (Ryan) Miller of Gardner, his sons Brian (LeeAnne) Cregan and Jeff (Sarah) Cregan of Lenexa, his 14 grandchildren, Lloyd, Andrew, Tyler, Madison, Lauren, Bella, Cooper, Mio, Rylee, Erik, Kaden, Payton, Karson, Jacob and 1 great grandchild, Harper. Paul loved his Kansas City Chiefs, Jeopardy, Wheel of Fortune, riding his Harley, fishing and spending time with friends and family. Paul was an amazing man who laughed, loved and lived his life to the fullest. He will be missed by many. The family wishes to thank the entire staff at the University of Kansas Medical Center, the ER and the cancer clinic for their amazing care and support as well as Kansas City Hospice House for their dedication and compassion for making his last days comfortable and peaceful. Paul will be laid to rest at Leavenworth National Cemetery on Friday, December 6, 2019 at 10:00 a.m. A celebration of life will be held on Saturday, December 7, 2019 from 2:00 p.m. to 5:00 p.m. at Garretts, 6505 Nieman Rd, Shawnee, KS 66203. Feel free to wear a Hawaiian shirt in honor of Paul. In lieu of flowers memorial contributions may be made in his memory to The Macan Family at macanithappen.com

It is with great sadness that we announce the peaceful passing of Paul Francis Cregan of Overland Park, KS on Saturday, November 30, 2019 at the age of 69. Paul was born June 25, 1950 in Edinburgh, Scotland to Francis and Mary Cregan. He is... View Obituary & Service Information

The family of Paul Cregan created this Life Tributes page to make it easy to share your memories.

It is with great sadness that we announce the peaceful passing...

Send flowers to the Cregan family.