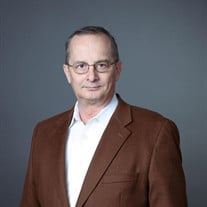 On Wednesday, May 12th, 2021, with the assistance of the compassionate and professional care of the VA Hospital staff in Kansas City, Missouri, Paul Klinkenborg passed peacefully in accordance with his expressed wishes. Free of pain, anxiety, and the medical fetters that so often inhibit a dignified death, he chose the moment of his passing by force of will at 62 years young. Paul was born in Creston, Iowa on May 29, 1958 to Culver and Verna (Freerksen) Klinkenborg and spent his formative years working on farms, raising State Blue Ribbon-winning 4H livestock, walking food to the cattle in freezing darkness with often-failing flashlights - all hard work he would often relate to his kids, not out of bitterness, but pride, and a great deal of humorous story-telling! He was molded by a rural community into a person of immutable strength of character, unshakable conviction, and a sense of duty to family and friends that never failed to leave an impression on those lucky enough to know him. Even after moving multiple times while enlisted in the Coast Guard, attending Electrical Technician School, completing his college degree, and later choosing the suburban life for the sake of his two sons, Paul remained forever at heart a product of Parkersburg, IA where he was raised- a community of characters cast in iron bodies with golden hearts and unbreakable communal bonds. Paul joined the Coast Guard in 1980, just prior to marrying Sheryl (Prohaska) Moore on May 30, 1980. After completing Boot Camp at the top of his class, he had his choice of first duty station and selected New Smyrna Beach, FL, a Search and Rescue Coast Guard station. He and his wife, Sheryl (Prohaska) Moore were married in May of 1980, moved there in September of 1980. He worked tediously by day, selflessly risked his life to save strangers, and attended night school. Paul was transferred to Governer’s Island, New York City in 1982 and Alameda, California in 1983. He ultimately earned his BS Degree in Economics from the University of San Francisco. After marriage, Paul and Sheryl raised two sons, Joseph and Samuel Klinkenborg. Joe was born at Letterman Army Hospital in San Francisco CA in 1984. Sam was born in Livermore, CA in 1988. “Civilian” life began in 1985 in Pleasanton, CA and continued in Lenexa, KS where they moved in 1993. Paul chose this location not just for work, but with the best wishes for his family, which motivated his every decision. Paul had many personal relationships that meant the world to him - the Klinkenborgs, Freerksens, Prohaskas, Beckers, Abkes’, Morris’ and Del Monte’s, to name a small few. He was a voracious reader, usually to be found in his moments of leisure with multiple books by. It would be a disservice to deny his appreciation for the finer things in life: a freezing pewter cup of Scotch in his favorite recliner with a book in hand, hunting with friends and family, friendly-if-highly-competitive Morrel hunting in the family owned Timber, and an occasional cigar. He loved woodworking and gardening. In his passing he leaves three brothers - Sam, Charlie and Bob, his two sons Joe (Becky Katz) and Sam (Sara Batliner), and three grand-children - Alex, Maya and Spencer. Given the chance it’s no doubt his only regret in passing would be not to be present to watch them grow up and take them fishing. Additionally, he is survived by numerous family members on both the Klinkenborg and Freerksen sides. He rests easy and free of pain, the anxieties of failing health, the annoyances of over-salted fries and watered-down drinks. He basks in a sun-baked brick living room to sip Scotch with his father; a screened-in porch, rain and thunder outside but never too windy, with a fire roaring in the hearth to reminisce with his mother, in raucous bar-rooms to cheers with Fran, or in solitary repose, all at his leisure. True to his zeal for life, Paul specifically requested no funeral ceremony and none will be given. He understood pain and grief intellectually and practically, and as such requests he be remembered with celebrations of life. The first of these celebrations will occur at Fox & Hound located at 10428 Metcalf Indian Creek Shpg Ctr, Overland Park, KS 66212 on Sunday 5/23 from 5-7 PM. A second celebration is in the works, to occur in his hometown of Parkersburg, IA. These details will be updated on this page as more information becomes available. Although no memorials are necessary, those wanting to contribute to Paul’s memory may do so to: Nature Conservancy: Flint Hills Initiative Donate to the Iowa Department of Natural Resources

On Wednesday, May 12th, 2021, with the assistance of the compassionate and professional care of the VA Hospital staff in Kansas City, Missouri, Paul Klinkenborg passed peacefully in accordance with his expressed wishes. Free of pain, anxiety,... View Obituary & Service Information

The family of Paul E. Klinkenborg created this Life Tributes page to make it easy to share your memories.

Send flowers to the Klinkenborg family.