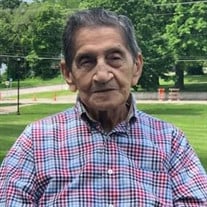 Raul "Lou" Anaya Alvarado May 27, 1923 – Jan 27, 2022. Lou passed of natural causes Thursday at noon with family by his side after a month of declining health and just short of his 99th birthday. Services will be held at Maple Hill Funeral Home Tuesday Feb. 8th. Visitation at 10:00am, Service at 11:30am, and Internment with Military honors at Leavenworth National Cemetery at 1:30pm. He was born in KCK May 27, 1923 to Anecito and Natalia Alvarado who had come to the US in the 1920’s following the Mexican Revolution of 1910. Growing up in the Argentine area of KCK, Lou had to attend the “Clara Barton” grade school for Hispanics in KCK. At the time Hispanics were not permitted to go to Argentine High School after completing the 8th grade and were expected to go to work to support their familes. This all changed after the flood of 1951 when the grade school was destroyed. He married Ernestine Rangel from Turner KS. on Oct. 15, 1942. Lou worked at the Downtown Muehlebach Hotel before going in the Army in 1943 and entered World War II in April 1943. He served in the Army 17th Airborne Glider Infantry Division at Normandy, the Rhine, and in the Battle of the Bulge. Lou was wounded in action in 1944 and was a disabled veteran awarded the Purple Heart. Discharged in November of 1945, he returned home from the war and began a family. Lou worked for the The Pullman Co., a railroad which was the predecessor to Amtrack. He always kept busy working to support his family once moonlighting as a taxi cab driver to earn extra money during the 1940's. With the availabity of his Army GI bill, he was able to take a vo-tech class for Upholstering in 1950. He would do upholstering in the garage at home as a side business for many years. Lou served his church on weekends performing maintenance & landscaping. After the devestating flood of 1951, Lou moved his family to Mission KS. until building a new home in Shawnee KS. in 1959. He and his wife Ernestine did much of the work on it. Lou taught his family good Christian values as well as a good work ethic. He was a God loving man attending church regularly until the COVID-19 pandemic started in early 2020. Having been married for 67 years when his beloved wife Ernestine passed in 2009, he lived by himself before moving in and being cared for by his daughter Millie. The family would like to give a special thanks to her for the special care she has given him over the past 5 years. Lou was preceded in death by his parents, his wife Ernestine, brothers, Antonio, Robert, Uriel, and sisters Juanita, Carolina, Conception, and many brother and sister in laws. He is survived by his daughters, Janette Goheen and husband Bernie from Auburn WA., Millie Morrison of Merriam KS., son Paul Alvarado and wife Mary of Overland Park KS., 12 grandchildren and 22 great grandchildren as well as many nieces and nephews.

Raul "Lou" Anaya Alvarado May 27, 1923 &#8211; Jan 27, 2022. Lou passed of natural causes Thursday at noon with family by his side after a month of declining health and just short of his 99th birthday. Services will be held at Maple Hill Funeral... View Obituary & Service Information

The family of Raul A. Alvarado created this Life Tributes page to make it easy to share your memories.

Send flowers to the Alvarado family.