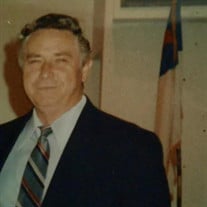 Raymond D. Hanners was born October 10, 1935, in Armourdale, Kansas City KS. He was born to Gus H. Hanners and Flossie (Rose) Hanners. He was married to Eva L. (Edler) Hanners for 69 years, and they lived at 3415 Woodend, Kansas City, KS. He was preceded in death by his son Raymond D. Hanners Jr. who went to be with the Lord in 1975, his great-grandchildren Kellee Jo Stewart and Matthew Edwards, his siblings Wayne Rose, Helen Gray, Alta Jacobs, Gus Hanners, Juanita Smith, Martha Lambeth, Kenneth Hanners and David Hanners. He is survived by his wife Eva L. Hanners (of the home), two sons Steven A Hanners Sr. of Burlington, KS, wife Junita (Daniels) Hanners, and Mark D. Hanners Sr of Hartford, KS, wife Susan (Allred) Hanners. Grandchildren Amy Indorf, Stephanie Grate, Steven Hanners Jr., Tabitha Mason, Mark Hanners Jr. and Shaina Hanners, 18 great-grandchildren, 14 great-great-grandchildren, and one sibling Donna Noble. Also, many nieces and nephews who love him and will miss him dearly. Raymond served in the Air Force in San Francisco, CA. He also served in the army in Panama for three years. Raymond worked at Standard Rendering (driving a truck) and was a teamster for Local 955 for 36 years. He was proud of his truck and loved driving. He would talk to everyone on his route about the Lord. He loved to be a witness to people. Raymond is an ordained minister through the Pentecostal Church of God. He was a pastor at two churches, The Rock Church in DeSoto, KS and the House of Prayer in Kansas City, KS. He was Sunday School Superintendent for many years and taught Sunday School. He also drove the church bus picking up children on Sunday mornings. He was always knocking on doors and passing out tracts, witnessing to people, many of whom were saved in their homes. Raymond loved his family and loved watching them play ball. He enjoyed teasing his grandchildren when they visited or spent time with him. He loved to have huge dinners at his house and always prayed over the food and asked the lord to bless his family. Raymond was ready to go to his “real” home. He kept repeating “In my Father’s house are many mansions. If it were not so, I would have told you. I go to prepare a place for you, that where I am you shall be also.” A funeral service will be held Monday, November 8, 2021 at 12:00 p.m. at Maple Hill Funeral Home at 3300 Shawnee Drive, Kansas City, KS. Immediately following will be a graveside service with military honors at the Maple Hill Cemetery.

Raymond D. Hanners was born October 10, 1935, in Armourdale, Kansas City KS. He was born to Gus H. Hanners and Flossie (Rose) Hanners. He was married to Eva L. (Edler) Hanners for 69 years, and they lived at 3415 Woodend, Kansas City, KS. He... View Obituary & Service Information

The family of Raymond D. Hanners created this Life Tributes page to make it easy to share your memories.

Send flowers to the Hanners family.