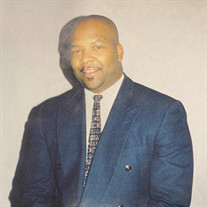 Richard Wayne Estell, 58, of Kansas City, Kansas, passed away on Tuesday, February 15, 2022. Richard Wayne Estell Sr. was born October 13, 1963 in Kansas City, KS to loving parents Joyce Estell & Walter Ellsworth. Richard attended schools in the Kansas City, KS School District and graduated from J. C. Harmon High School, class of 1982. Richard was a man of faith and was baptized as a child at Quindaro Community Christian Church. He loved attending church with his family and sharing what he learned with others. He loved reading the Bible and repeating his favorite passage, Psalm 23. No matter what happened in his life, he knew the Lord was his Shepherd. Richard had many gifts and talents, especially when it came to sports. Although he played several, it was his love of football that allowed his athletic ability to shine. He started playing football in little league. He continued to soar with his football, and it paid off. After high school, we went on to receive a full football scholarship to the University of Kansas. At KU, he excelled as a wide receiver and would go on to break several records in the Big 8 Division. His football skills caught the eye of several teams, both nationally and internationally. He would play for the Kansas City Chiefs before signing a 3-year deal with the Canadian Football League as a wide receiver for the Hamilton Tigers. He would remain die hard Chiefs fan for life and loved cheering his team on. Along his path in life, he would meet and later marry his best friend Shelley Haynes. The two were blessed with Richard’s eldest daughter, Brooke Estell. Later in life, he would meet and unite with Erika Rucker. This relationship saw the blessing of his second daughter, Sydney Estell, and his son, Richard Estell Jr. Richard is preceded in death by his father, Walter. To cherish his memory, e is survived by mother Joyce Estell; son Richard Estell Jr.; daughters Brooke Noel Estell and Sydney Richelle Estell; brother Winston Eugene Teller; sister Dena Marie Estell; step-daughter Aubrionna Lynn Donahue; grandchildren Malaya "Lay-Lay," Londyn "Lo-Lo" and step grandchildren E.J. and Antonio. A visitation will be held on Saturday, March 5, 2022 from 10:00-11:00 A.M. at Forest Grove Baptist Church with a funeral service beginning at 11:00 A.M.

The family of Richard Wayne Estell created this Life Tributes page to make it easy to share your memories.

Send flowers to the Estell family.