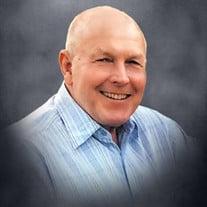 Richard Arnold Karcher, 87 of Parkville, Missouri went home to be with the Lord on August 2, 2021, with his family by his side. His strong willed and tenacious spirit and strong faith in God carried him through his time on earth and ultimately led him home. Richard was born on July 1, 1934 to Reinhold “Richard” and Anna Karcher in the Piper area of Kansas City, Kansas. Richard was blessed with two younger siblings, Kenneth and Kathleen, whom he loved dearly. Richard was raised by Polish and German immigrant parents who raised him with a deep appreciation for his culture, as well as a deep patriotism for the United States. On July 3, 1952 Richard left for San Diego, California with the United States Navy. Shortly after bootcamp he attended Aircraft Familiarization and Engine school and was soon sent overseas with a squadron of flight bombers during the Korean Conflict. In 1956 Richard had the honor of serving aboard the U.S.S Ticonderoga CVA-14 stationed in the Mediterranean. While serving on board he was placed in charge of maintenance of the AJ-2 aircraft. Up to his death, the time Richard spent serving his country was one of the greatest honors of his lifetime, and he carried those years with pride. Upon his discharge from the US Navy on July 2, 1956 Richard moved back home to Wyandotte County, Kansas to live with his mother. He soon accepted a job with TransWorld Airlines as a store clerk and after 7 years with TWA was promoted to engine mechanic and again years later to engine inspector. Richard took great pride in his 43 year career for TWA and continued to nurture a passion for aircraft for years to come. While working at TWA, Richard was introduced to the then secretary, Opal Potts. Opal was the love of Richards life. They were married on April 11, 1964, and his heart cherished her every moment until his death. Richard and Opal began attending Opal’s church together and there Richard was introduced to a personal relationship with Jesus Christ and from there he lived all the days of his life as a strong willed German with a passionate heart for the Lord. Richard and Opal were blessed with two beautiful daughters, Amy and Heidi. They raised their daughters to desire a relationship with Jesus and follow in the Godly legacy set before them. Years later, Richard was blessed with six grandchildren and four great grandchildren. Becoming a “Papa” softened Richard in a way nothing else had. He could often be found cuddling his grandchildren, chasing them around the house or just keeping them amused with his witty and ornery sense of humor. Richard was a strong man of God, he spent many years serving alongside his wife, teaching the children and youth at the Metropolitan Nazarene Church and was influential in leading many souls to the Lord. Richard was outspoken in his beliefs, both religious and political and would often share them filter free with anyone willing to listen. Richard enjoyed watching John Wayne movies, westerns and war documentaries. He loved making people laugh and playing witty tricks on his wife, children, grandchildren, and great grandchildren. He enjoyed bowling with his wife for many years and just being in her presence. Richard is survived by his daughters Amy Falter and Heidi Cannon; his grandchildren, Ashley Haas, Whitney Johnson, (Richard) Caleb Falter, Morgan Cannon, Joshua Falter and Hope Cannon; as well as four great grandchildren, Juliet Welch, Harper Haas, Ella Falter and Emery Opal Haas. He is preceded in death by his beautiful wife, Opal, his mother and father Richard and Anna Karcher, his brother Kenneth Karcher and sister Kathleen Horner, as well as many other loved ones who were waiting for him when the Lord called him home. The visitation for Richard will be held at the Maple Hill Funeral Home in Kansas City, Kansas on Monday August 9th from 5:00pm-6:00pm and a funeral service following at 6:00pm. Burial will be held for family the following morning at 10am at Leavenworth National Cemetery.

Richard Arnold Karcher, 87 of Parkville, Missouri went home to be with the Lord on August 2, 2021, with his family by his side. His strong willed and tenacious spirit and strong faith in God carried him through his time on earth and ultimately... View Obituary & Service Information

The family of Richard Arnold Karcher created this Life Tributes page to make it easy to share your memories.

Send flowers to the Karcher family.