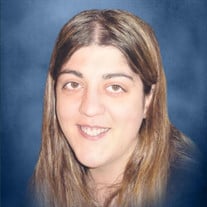 Richelle Diana Riahi, 42, of Lenexa, Kansas passed away at The University of Kansas Hospital on May 28th, 2022, after battling a rare and severe medical condition. Visitation will be Monday, June 6th from 5-7pm. Funeral services will be held at 11am on Tuesday, June 7th, at Maple Hill Funeral Home. Burial will be in Maple Hill Cemetery. Richelle was born in Kansas City, Missouri at Research Medical Center. Her parents are Iraj Riahi and Diana Cunningham Riahi. Richelle graduated from Shawnee Mission West High School in 1997. She attended Johnson County Community College while she worked for Disney as a customer service representative. This was where her lifelong love of Disney began. She then went on to become co-owner of Angels In Training Daycare with her mom, which they operated together for 18 years. Richelle was a sales representative for Scentsy and enjoyed collecting warmers and attending conventions. She lived most of her life in Lenexa, KS. She was a Girl Scout leader for both her younger sister Farah, and her daughter Hope. Leading her daughter’s Girl Scout troop was a favorite and big part of Richelle’s life, which she enjoyed very much. She also loved vacationing in Florida at Walt Disney World. Her most recent trip was to Universal Studios with her mother and daughter. She loved Harry Potter, Disney Villains and Marvel Movies. Richelle had a sweet and kind heart. She put her whole self into the things she loved to do. She loved planning kids parties for her daughter and Girl Scout troop. She also loved planning vacations, holiday activities, and summer trips with the kids. Richelle was exceptionally brave and strong. Her strength inspired all who knew her. She was a single mother to Hope, who was her whole world. She fought through many medical conditions and never gave up her fight. Even through her own struggles, Richelle would go out of her way to help others. She was an outgoing person and could be a friend to anyone. Richelle was her mom’s best friend. She was the best sister and a loving aunt to her nieces and nephews. Richelle had a strong faith in God and had accepted Christ as her Lord and Savior at a young age. She leaves to mourn a mother and father, Diana and Iraj Riahi, her daughter Hope Dieffenbach, a sister and brother-in-law, Farah and Tim Gabriel, a brother and sister-in-law, Cyrus Riahi and Dee Vongsaphay, her aunt and uncle Tammy and Kevin Wilson, uncle Mike and five nieces and nephews, Violet, Cairo, Scarlet, Carma and Hunter, to which she was a wonderful “Aunt Chelle”. Her other family members left to mourn are the TajmirRiahi's, Mozoun’s, Ezadi’s, Keshmiri’s and Iranpour’s. She is preceded in death by her grandparents Vedah and Marvin “Jack” Cunningham (Maternal), and Hamdam and Hosein Riahi (Paternal).

Richelle Diana Riahi, 42, of Lenexa, Kansas passed away at The University of Kansas Hospital on May 28th, 2022, after battling a rare and severe medical condition. Visitation will be Monday, June 6th from 5-7pm. Funeral services will be held... View Obituary & Service Information

The family of Richelle Diana Riahi created this Life Tributes page to make it easy to share your memories.

Richelle Diana Riahi, 42, of Lenexa, Kansas passed away at The...

Send flowers to the Riahi family.