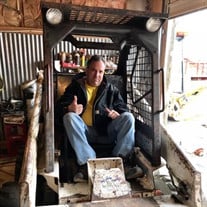 After a protracted battle with cancer, Mr. Robert Glen “RG” Odell III, passed away on July 29, 2019 in Lee’s Summit, Missouri at the age of 56. He leaves behind his daughter, Erica Odell and son Branden Arnold, also of Lee’s Summit, Missouri. RG was born on November 20, 1962 in Kansas City, Missouri to Robert G. Odell Jr., of Kansas City, Missouri and Shirley J. (De Lapp) Odell of Overland Park, Kansas. RG grew up with one sister, Tracie. RG attended Shawnee Mission South High School then went on to attend The University of Kansas where he studied Engineering. RG was a self-employed utility contractor in the Kansas City area for the past thirty years. When RG was diagnosed with kidney cancer in 2017, he remained dedicated to his work and diligent in his will to fight. He remained a brave, iron-willed man throughout his final months. RG was a devout father and an avid fan of his children. He enjoyed watching them during their various sporting events and cherished their time together as they traveled the United States. RG is survived by his parents, children, as well as his sister, Tracie (Tony) Clark, of Prairie Village, KS; his Aunt Patricia De Lapp, of Overland Park, KS; his Aunt Kathleen (Charles) Schmeltekopf of Carrollton, TX; his Aunt June Bonjour, of Lenexa, KS; his Uncle Theodore "Barbara" Odell, Lenexa, KS; five cousins, two nieces and two nephews, and one great niece and one great nephew. RG leaves a host of friends to mourn the loss of a good man, one who could always be looked to as an example of a true friend and devoted father. A memorial visitation will be held at Maple Hill Funeral Home on Sunday, August 4th from 3-5pm, followed by a Celebration of Life service. RG will be interred at the family plot in Johnson County Memorial Gardens. The family would especially like to thank St. Luke’s Hospital physicians and nurses for their utmost care and compassion; Lee’s Summit Pointe residents and caregivers, for their constant, attentive treatment; Kansas City Hospice and Palliative Care team for their loving care and commitment; and Maple Hill Funeral Home, for making the arrangements. In lieu of flowers, contributions can be made to Erica Odell, by sending your check to 4380 SW Creekview Dr., Lee's Summit, MO 64082 for her educational needs.

The family of Robert G. (RG) Odell III created this Life Tributes page to make it easy to share your memories.

Send flowers to the Odell family.